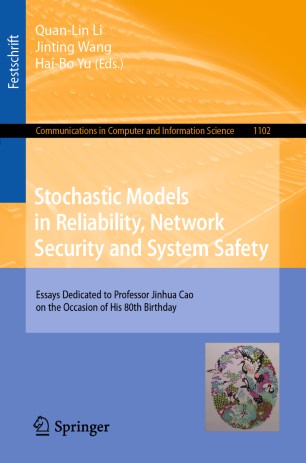 Part of the Communications in Computer and Information Science book series (CCIS, volume 1102)

This book is dedicated to Jinhua Cao on the occasion of his 80th birthday. Jinhua Cao is one of the most famous reliability theorists. His main contributions include: published over 100 influential scientific papers; published an interesting reliability book in Chinese in 1986, which has greatly influenced the reliability of education, academic research and engineering applications in China; initiated and organized Reliability Professional Society of China (the first part of Operations Research Society of China) since 1981. The high admiration that Professor Cao enjoys in the reliability community all over the world was witnessed by the enthusiastic response of each contributor in this book. The contributors are leading researchers with diverse research perspectives. The research areas of the book iclude a broad range of topics related to reliability models, queueing theory, manufacturing systems, supply chain finance, risk management, Markov decision processes, blockchain and so forth.

The book consists of a brief Preface describing the main achievements of Professor Cao; followed by congratulations from Professors Way Kuo and Wei Wayne Li, and by Operations Research Society of China, and Reliability Professional Society of China; and further followed by 25 articles roughly grouped together. Most of the articles are written in a style understandable to a wide audience. This book is useful to anyone interested in recent developments in reliability, network security, system safety, and their stochastic modeling and analysis.