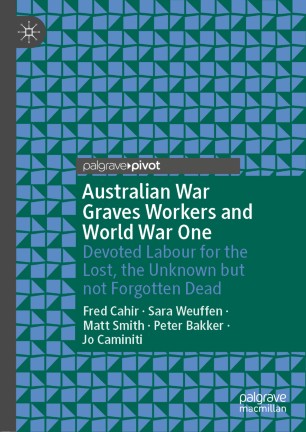 Devoted Labour for the Lost, the Unknown but not Forgotten Dead

This book relays the largely untold story of the approximately 1,100 Australian war graves workers whose job it was to locate, identify exhume and rebury the thousands of Australian soldiers who died in Europe during the First World War. It tells the story of the men of the Australian Graves Detachment and the Australian Graves Service who worked in the period 1919 to 1922 to ensure that grieving families in Australia had a physical grave which they could mourn the loss of their loved ones. By presenting biographical vignettes of eight men who undertook this work, the book examines the mechanics of the commemoration of the Great War and extends our understanding of the individual toll this onerous task took on the workers themselves.

Fred Cahir is an Associate Professor of History in the School of Arts at Federation University Australia. He is a grandson of Staff Sergeant Frank Cahir DSM, MM a photographer and medical dispenser in the Australian Graves Service. Dr Cahir is an award winning historian.

Sara Weuffen is a Lecturer, Centre for Learning Innovation and Professional Practice (CLIPP), Federation University Australia. She is a history and education lecturer and researcher. She is the grand-daughter of a German machine-gunner whose family immigrated to Australia following WWI.

Matt Smith is a teacher with Education Queensland who has studied WWI and WWII battlefields for 25 years. Matthew has been instrumental in the development of the non-profit organisation Australian War Graves Photographic Archive. He is the great-grandson of Private John Craven Smith, a member of the Australian War Graves Detachment.

Peter Bakker is a secondary school teacher at Bayside Christian College, Australia. His long term interest in military history began with research into his grandfather’s service in WW1 with the New Zealand Medical Corps. For the last ten years, Peter has been at the forefront of research into Australian Aboriginal contributions to Australia’s military history.

Jo Caminiti is granddaughter of Private William McBeath who served with the Australian Graves Detachment. A published environmental scientist, Jo is a multi-passionate creative exploring sustainable living and her full time visual arts practice at her smallholding by the Rainbow Creek in Victoria, Australia.