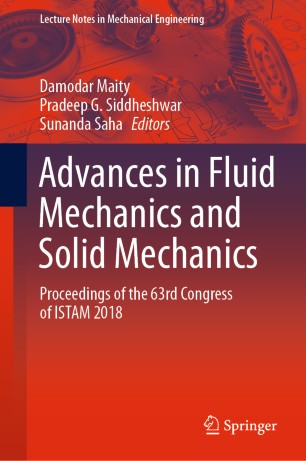 Proceedings of the 63rd Congress of ISTAM 2018

This book comprises select proceedings of the 63rd Congress of the Indian Society of Theoretical and Applied Mechanics (ISTAM) held in Bangalore, in December 2018. Latest research in computational, experimental, and applied mechanics is presented in the book. The chapters are broadly classified into two sections - (i) fluid mechanics and (ii) solid mechanics. Each section covers computational and experimental studies on various contemporary topics such as aerospace dynamics and propulsion, atmospheric sciences, boundary layers, compressible flow, environmental fluid dynamics, control structures, fracture and crack, viscoelasticity, and mechanics of composites. The contents of this book will serve as a useful reference to students, researchers, and practitioners interested in the broad field of mechanics.

Dr. Damodar Maity is currently Professor in the Department of Civil Engineering, Indian Institute of Technology, Kharagpur. After graduating from Jadavpur University, Kolkata in Civil Engineering, he obtained Ph. D. from IIT Kharagpur in the area of fluid-structure interaction. Prof. Maity has more than 150 research publications in journals and conference proceedings of national and international repute. His research interests include computation mechanics, structural health monitoring, fluid-structure interaction. He has received two best paper awards from The Institution of Engineers (India). Prof. Maity is author of a book titled “Computer Analysis of Framed Structures”. He was joint convener of the 2nd International Congress in Computational Mechanics and Simulation held in 2006 at IIT Guwahati. He has served as scientific/advisory board member of several international conferences. He served as secretary for The Indian Society of Theoretical and Applied Mechanics for three consecutive years. Prof. Maity has developed a video course on “Design of Steel Structures” and a web course on “Finite Element Analysis” under NPTEL, MHRD.
Dr. Pradeep G. Siddheshwar, F.I.M.A (U.K.), F.N.A.Sc., is Professor in the Department of Mathematics and Director Planning, Monitoring and Evaluation Board Bangalore University. He has 35 years of teaching experience and nearly 40 years of research experience. He has guided 24 students for their Ph.D. degree. He has over 150 research papers in international journals of repute. He has 1947 google scholar citations, h-index of 24 and i10-index of 56. He was President of the Indian Society of Theoretical and Applied Mechanics, IIT, Kharagpur. He has visited over 20 countries on research assignments. He is a recipient of the Royal Society Incoming Fellowship, London, William Mong Fellowship, Hong Kong and a number of other Fellowships.
Dr. Sunanda Saha is currently Assistant Professor in the Department of Mathematics, Dayananda Sagar University, Bangalore. After graduating from IIT Madras in Mathematics she obtained her Ph. D. from IIT Guwahati in the area of water wave theory. She has published several research papers in reputed international journals. Her research interests include shallow water wave theory, flow in porous media, special functions, integral transform and cardiovascular modelling and simulations. She has received early career research grant for 3 years from SERB-DST and for 1 year from VGST for working on “Mathematical modelling and numerical simulation of  blood flow in arteries”.  She was the convener of the 62nd International Conference of ISTAM held in 2018 at Dayananda Sagar University. She is the Vice-President for The Indian Society of Theoretical and Applied Mechanics, IIT Kharagpur, for the year 2019.