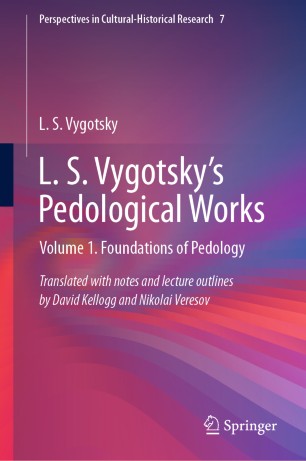 This book provides both a lost last word and a firm first foundation: seven lectures, given in the last months in the life of the Soviet thinker, teacher, and writer L.S. Vygotsky, offer us the most comprehensive and developed form of his thoughts on the child, expressed in the most fundamental and even popular form that Vygotsky himself used with his beginner-level students. As the title of Vygotsky’s course indicates, these are foundations upon which cultural-historical researchers can rebuild the lost science of “pedology”, a holistic approach to child development based on the dynamic unity of physical and mental development.
Volume One includes translations of seven of Vygotsky’s lectures that reflect his approach to pedology; the method of pedology and the “methodics” of the unit of analysis; the role of heredity and social environment in child development; and general laws of development in childhood that will help parents and teachers understand the way the child’s endocrine system, nervous system, and mind change as the child enters a culture and learns to make history.

L.S. Vygotsky was a teacher, writer, and thinker in the early Soviet Union who worked in the fields of psychology, “defectology” (special education), and “pedology” (the holistic study of the child). In a meteoric career that lasted little more than a decade, he was able to lay the foundations of what has become cultural-historical psychology today. By analysing the specifically human, cultural-historical roots of higher mental functions and emphasizing the role that language plays in development, Vygotsky provided a research method that is monist, non-reductionist, and dialectical.
About the Translators
David Kellogg is an assistant professor at Sangmyung University in Seoul, South Korea, where he teaches courses on language and linguistics. He and his former students have published ten volumes of Vygotsky translations in Korea. He is the author of The Great Globe: Narrative and Dialogue in Story-telling with Halliday, Vygotsky, and Shakespeare.
Nikolai Veresov is currently an associate professor at Monash University. He has published widely on Vygotsky in many languages, including Vygotsky’s native Russian. He is the author of Undiscovered Vygotsky (1999), and the translator of Vygotsky’s “Consciousness as a Problem in the Psychology of Behaviour” (1999) and “The Role of Play in the Development of the Child” (2016). He has also translated D.B. Elkonin’s work on periodizing child development (2000).