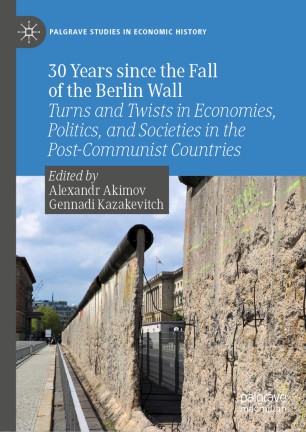 30 Years since the Fall of the Berlin Wall

Turns and Twists in Economies, Politics, and Societies in the Post-Communist Countries

The year 2019 marks 30 years since the fall of the Berlin wall. This symbolic event led to German unification and the collapse of communist party rule in countries of the Soviet-led Eastern bloc. Since then, the post-communist countries of Central, Eastern and South-eastern Europe have tied their post-communist transition to deep integration into the West, including EU accession. Most of the states in Central and Eastern Europe have been able to relatively successfully transform their previous communist political and economic systems. In contrast, the non-Baltic post-Soviet states have generally been less successful in doing so. This book, with an internationally respected list of contributors, seeks to address and compare those diverse developments in communist and post-communist countries and their relationship with the West from various angles.

The book has three parts. The first part addresses the progress of post-communist transition in comparative terms, including regional focus on Eastern and South Eastern Europe, CIS and Central Asia. The second focuses on Russia and its foreign relationship, and internal politics. The third explores in detail economies and societies in Central Asia. The final part of the book draws some historical comparisons of recent issues in post-communism with the past experiences.