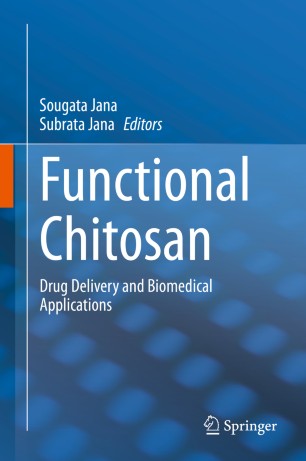 Thanks to their unique properties, chitosan and chitosan-based materials have numerous applications in the field of biomedicine, especially in drug delivery. This book examines biomedical applications of functional chitosan, exploring the various functions and applications in the development of chitosan-based biomaterials. It also describes the chemical structure of chitosan and discusses the relationship between their structure and functions, providing a theoretical basis for the design of biomaterials. Lastly, it reviews chemically modified and composite materials of chitin and chitosan derivatives for biomedical applications, such as tissue engineering, nanomedicine, drug delivery, and gene delivery.

Sougata Jana is a B.Pharm (Gold Medalist) from West Bengal University of Technology, Kolkata, and M. Pharm (Pharmaceutics) from Biju Patnaik University of Technology, Odisha, India. He worked as an Assistant Professor at Gupta College of Technological Sciences, Asansol, West Bengal, India, and is currently working at the Department of Health and Family Welfare, Directorate of Health Services, Kolkata, India. He has been engaged in pharmaceutical education and research for the last 11 years. He was awarded the “M. N Dev Memorial Award” by IPA Bengal branch, Kolkata, India, for securing the highest marks in the state of West Bengal in 2005. He received the “Best Poster Presentation Award” at the 21st West Bengal State Science and Technology Congress, 2014, and “Outstanding Paper Award” at the 1st Regional Science and Technology Congress, 2016, organized by DST, Govt. of West Bengal, India. He has 30 publications in different national and international peer-reviewed journals. He edited books in Springer, Elsevier, and Pharmamedix India Publication Pvt., Ltd., and has contributed more than 35 book chapters to Elsevier, Springer, Wiley VCH, CRC Press, and Taylor & Francis. His research area of interest includes modification of synthetic and natural biopolymers, microparticles, nanoparticles, semisolids, and interpenetrating polymer network system for controlled drug delivery.

Subrata Jana is presently working as an Associate Professor at the Department of Chemistry, Indira Gandhi National Tribal University (Central University), Amarkantak, Madhya Pradesh, India, and his current research focuses on the design and synthesis of artificial receptors for the recognition of anions, cations, and N-methylated protein residue. His other area of research interest is biodegradable polymeric-based carrier systems for the delivery of drug molecules. So far he has published ~40 research papers in peer-reviewed international journals and contributed more than 10 book chapters to different edited books published by internationally renowned publishers. He is also an editorial board member in the Journal of PharmaSciTech (ISSN: 2231 3788) and the International Journal of Scientific and Engineering Research (ISSN: 2229-5518) and a reviewer in the International Journal of Biological Macromolecule (Elsevier), the Journal of PharmaSciTech, and Current Pharmaceutical Design (Bentham). He has obtained his PhD in organic chemistry from Indian Institute of Engineering Science and Technology (IIEST), Shibpur, India. Then he moved to the University of Victoria, Canada, to work with Professor (Dr.) Fraser Hof on supramolecular and medicinal chemistry as a postdoctoral fellow. He then worked further with Dr. Kenneth J Woycechowsky at the University of Utah, USA, on protein engineering and enzyme catalysis as a postdoctoral research associate. Overall he extensively studied on the supramolecular behavior of the host–guest interaction and synthesis of heterocyclics, such as pyrimidines, naphthyridines, quinoline, and diazepines, by exploiting microwave protocol for green chemical synthesis.