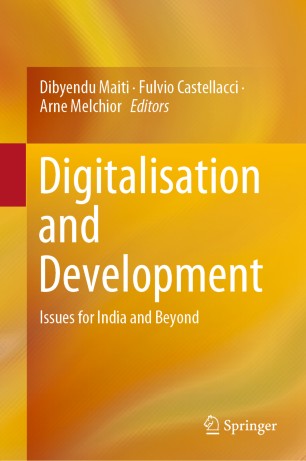 Issues for India and Beyond

This book investigates the impact of information and communication technologies (ICTs) on development and well-being (beyond economic benefits) and highlights some emerging issues relating to the realities, constraints and digital divides with particular reference to India. It collects a series of novel contributions, studying the Indian experience in an international cross-country perspective. The book also discusses economic, social, and behavioural aspects of well-being as well as access to ICTs across regions, states and individuals to account for the digital divide. The book establishes an aggregate relationship between ICT exposure and well-being at the country level and addresses a number of fundamental issues, such as whether ICT raises the level of transparency and governance. Based on case studies and anecdotal evidence, it then further assesses the effective implementation of service delivery through ICT innovations.

The book is divided into four parts: The introductory part surveys the literature and presents background information on the Indian case; introduces the main themes on the relationships between ICT, socio-economic development and digital divides; and provides a summary and roadmap to the chapters of the book. Part II focuses on the impact of ICT on economic performance, including economic growth, productivity and trade. Part III examines the extent of the digital divides in India, including international, regional as well as inter-personal inequality. Finally, Part IV investigates the impact of ICT on governance, users’ well-being and social outcomes. Combining insights from analyses of a variety of socio-economic dimensions related to digitalisation, this book is relevant for a wide range of scholars and researchers across disciplines, as well as practitioners and policy-makers. While the book has a main focus on India, various contributions take an international cross-country comparative perspective, and the results have general relevance for digitalisation and development. On the whole, the main message of this book is that the impact of ICTs is contingent upon other assets, capabilities and institutional conditions. National policies should, therefore, not only promote digitalization as such but also ensure its co-evolution and complementarity with a variety of other country-specific factors.

Chapter 'Digitalisation and Development: Issues for India and Beyond' of this book is available open access under a CC BY 4.0 license at link.springer.com

Fulvio Castellacci is Director of the TIK Centre for Technology, Innovation and Culture at the University of Oslo. He has a PhD in Innovation Studies (University of Oslo, 2004) and a PhD ("Dottorato di Ricerca") in Economics (University of Rome La Sapienza, 2005). He was Senior Research Fellow at the Norwegian Institute of International Affairs (NUPI) since 2007, and Head of Department of International Economics at NUPI between 2008 and 2014. Since 2014, he has been working as Director of the TIK Centre at the University of Oslo. His research interests are within the economics of innovation, and specifically on the patterns and socio-economic impacts of R&D and technological innovation at the firm, sector and country-levels of analysis. His research is published in major journals in this field, e.g. Research Policy, Industrial and Corporate Change, and World Development.

Arne Melchior is Senior Research Fellow at the Norwegian Institute of International Affairs (NUPI), Oslo, Norway, where he has headed the Research Group on International Economics and Trade for extended periods, and managed a large number of research projects focusing on international trade. He holds a PhD in international economics from the University of Oslo (1997) and a Certificate of Advanced European Studies at College of Europe, Belgium. His research focuses on international trade, trade policy and economic geography, with a large number of books, articles, policy-related and popular publications. Work in recent years includes studies of Russia, China, India and Western Europe and the use of large-scale numerical models. The book “Free Trade Agreements and Globalisation: In the Shadow of Brexit and Trump” (Palgrave Macmillan, 2018) uses a new model of the world economy in the analysis of world trade and trade agreements. Melchior also has extensive experience from university teaching as well as academic and popular presentations in Norway and abroad, as well as an early career dealing with international trade negotiations.