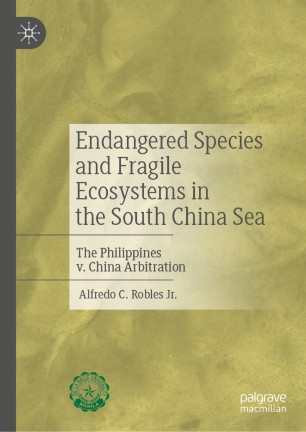 Endangered Species and Fragile Ecosystems in the South China Sea

The aims of the book are two-fold. First, it seeks to explain the Philippine perspective on the environmental aspects of its dispute with China. The book reconstructs the Philippine perspective in part by consulting several dozens of the hundreds of documents that the Philippines submitted to the Tribunal. Some of these documents were classified as secret and would thus have never been made available to the public had it not been for the arbitration. Second, it attempts to explain the decisions of the Tribunal on jurisdiction and admissibility as well as the decisions on the merits of the dispute. The book does this by consulting not only the two Awards but also the hundreds of pages of transcripts, expert reports, supplemental submissions and written responses by the Philippines to questions posed by the Tribunal.

Alfredo C. Robles, Jr. is a University Fellow at De La Salle University, Philippines. He holds doctorate degrees from the Université Paris 1 (Panthéon-Sorbonne), France and Syracuse University, USA. He is the author of French Theories of Regulation and Conceptions of the International Division of Labour (1994), The Political Economy of Interregional Relations: ASEAN and the EU (2004), The Asia-Europe Meeting: The Theory and Practice of Interregionalism (2008), and The South China Sea Arbitration: Understanding the Awards and Debating with China (2018).