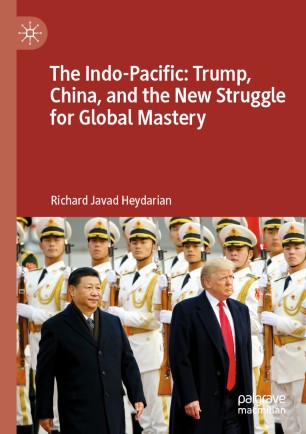 The Indo-Pacific: Trump, China, and the New Struggle for Global Mastery

This book places the presidency of Donald Trump as well as the brewing Sino-American Cold War within the broader historical context of American hegemony in Asia, which traces its roots to Alfred Thayer Mahan’s call for a naval build up in the Pacific, the subsequent colonization of the Philippines and, ultimately, reaching its apotheosis after the defeat of Imperial Japan in the Second World War. The book, drawing on visits from Cairo to California and Perth to Pyongyang as well as interviews and exchanges with heads of state and senior officials from across the Indo-Pacific, provides an overview of the arc of American primacy in the region for scholars, journalists, and concerned citizens.
Richard Javad Heydarian is an Asia-based academic, having taught political science at Ateneo De Manila University and De La Salle University, Philippines. He is currently a fellow at the National Chengchi University, Taiwan. He is a regular contributor to Centre for Strategic and International Studies (CSIS) and Council on Foreign Relations (CFR). He has written for/or interviewed by Aljazeera, BBC,Bloomberg, The New York Times, Foreign Affairs, The Guardian, The Washington Post, The Financial Times, Wall Street Journal, The Economist, The Atlantic, South China Morning Post, Nikkei Asia Review, Straits Times, among other leading publications.

Rise of China America First Pivot to Asia American alliances in Asia One Belt, One Road