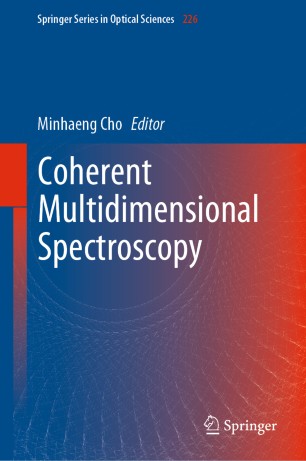 This book will fulfill the needs of time-domain spectroscopists who wish to deepen their understanding of both the theoretical and experimental features of this cutting-edge spectroscopy technique. Coherent multidimensional spectroscopy (CMDS) is a state-of-the-art technique with applications in a variety of subjects like chemistry, molecular physics, biochemistry, biophysics, and material science. Due to dramatic advancements of ultrafast laser technologies, diverse multidimensional spectroscopic methods utilizing combinations of THz, IR, visible, UV, and X-ray radiation sources have been developed and used to study real time dynamics of small molecules in solutions, proteins and nucleic acids in condensed phases and membranes, single and multiple excitons in functional materials like semiconductors, quantum dots, and solar cells, photo-excited states in light-harvesting complexes, ions in battery electrolytes, electronic and conformational changes in charge or proton transfer systems, and excess electrons and protons in water and biological systems.

Minhaeng Cho was born in Seoul. He received B.S. and M.S. degrees in chemistry from Seoul National University in 1987 and 1989 and a Ph.D. from University of Chicago in 1993 under the direction of Graham R. Fleming. After two years of postdoctoral training at MIT in Robert J. Silbey’s group from 1994 to 1996, he has been on the faculty of Korea University since March 1996, where he was the director of the Center for Multidimensional Spectroscopy from 2000 to 2009. In December 2014, he was appointed as the Director of the IBS (Institute for Basic Science) Center for Molecular Spectroscopy and Dynamics, located in Korea University, Seoul, South Korea.
His research interests are theoretical and computational chemistry and ultrafast nonlinear optical spectroscopy. He was elected as a member of the Korean Academy of Science and Technology (KAST) in 2002. He is a recipient of the Nobel Laureate Signatures Award (American Chemical Society) in 1995, Young Scientist Award (Ministry of Science and Technology, Korea) in 1999, Kyung-Am Prize in 2010, KAST Award in 2011, and Korea National Academy of Science Award in 2012.