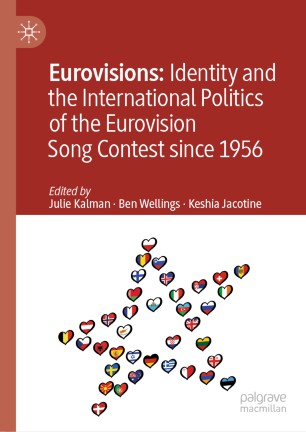 Eurovisions: Identity and the International Politics of the Eurovision Song Contest since 1956

This book uses the Eurovision Song Contest (ESC), as an analytical entry point to understand and illuminate post-War Europe and the drive to create an identity that can legitimise the European project in its broadest sense. The ESC presents an idealised vision of Europe, and this has long existed in a strained relationship with reality. While the trajectory of post-war European integration is a high-profile topic, we believe that the ESC offers a unique and innovative way to think about the role of culture in the history of post-War European integration and tensions between the ideal and reality of European unity. Through the series of case studies that make up the chapters in this book, analysis brings these interlinked tensions to light, exploring the roles of culture and identity, alongside and a productive conversation with the political and economic projects of post-war European integration.
Julie Kalman is Associate Professor of History at Monash University in Melbourne, Australia. She has published widely on the history of French-speaking Europe.
Ben Wellings is a Senior Lecture in Politics and International Relations at Monash University in Melbourne, Australia. He is the author of English Nationalism, Brexit and the Anglosphere: wider still and wider (2019) and English Nationalism and Eurosceptcism: losing the peace (2012).
Keshia Jacotine works in research development at Monash University in Melbourne, Australia. She holds a MPhil in Political Science, and has written about British and European politics for theConversation and Australian Broadcasting Corporation.