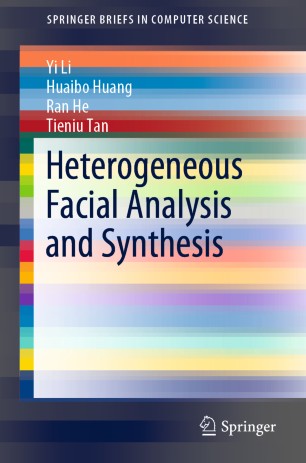 This book presents a comprehensive review of heterogeneous face analysis and synthesis, ranging from the theoretical and technical foundations to various hot and emerging applications, such as cosmetic transfer, cross-spectral hallucination and face rotation. Deep generative models have been at the forefront of research on artificial intelligence in recent years and have enhanced many heterogeneous face analysis tasks. Not only has there been a constantly growing flow of related research papers, but there have also been substantial advances in real-world applications. Bringing these together, this book describes both the fundamentals and applications of heterogeneous face analysis and synthesis. Moreover, it discusses the strengths and weaknesses of related methods and outlines future trends.

Offering a rich blend of theory and practice, the book represents a valuable resource for students, researchers and practitioners who need to construct face analysis systems with deep generative networks.

Yi Li received her B.E. degree in Electronic and Information Engineering from Dalian University of Technology in 2014, and her M.E. degree in Information and Communication Engineering from the same university in 2017. She is currently a Ph.D. student at the Center for Research on Intelligent Perception and Computing (CRIPAC), National Laboratory of Pattern Recognition (NLPR), CASIA, Beijing, China. Her research interests include computer vision and pattern recognition.

Huaibo Huang received his B.E. degree in Measurement and Control Technology and Instruments from Xi’an Jiaotong University in 2012, and his M.E. degree in Optical Engineering from Beihang University in 2016. He is currently a Ph.D. student at the Center for Research on Intelligent Perception and Computing (CRIPAC), National Laboratory of Pattern Recognition (NLPR), CASIA, Beijing, China. His research interests include computer vision and pattern recognition.

Ran He received his B.E. degree in Computer Science and his M.S. degree in Computer Science from Dalian University of Technology, and his Ph.D. degree in Pattern Recognition and Intelligent Systems from the Institute of Automation, Chinese Academy of Sciences in 2001, 2004 and 2009, respectively. In September 2010, Dr. He joined the NLPR, where he is currently a Professor. He is a member of the IEEE (Institute of Electrical and Electronics Engineers) and serves as an Associate Editor of the journal Neurocomputing (Elsevier), and on the program committees of several conferences. His research interests chiefly focus on information theoretic learning, pattern recognition, and computer vision. He has published over 140 conference papers and journal articles in highly ranked international journals, such as IEEE Transactions on Pattern Analysis and Machine Intelligence (TPAMI), IEEE Transactions on Image Processing (TIP), and Neural Computation (NECO).  Tieniu Tan received his B.Sc. degree in Electronic Engineering from Xi'an Jiaotong University, China, in 1984, and his M.Sc. and Ph.D. degrees in Electronic Engineering from the Imperial College London, UK, in 1986 and 1989, respectively. In October 1989, he joined the Computational Vision Group in the Department of Computer Science, University of Reading, UK, where he worked as a Research Fellow, Senior Research Fellow and Lecturer. In January 1998, he returned to China to join the National Laboratory of Pattern Recognition (NLPR), where he is currently a Professor. He is the former director (1998–2013) of the NLPR and Center for Research on Intelligent Perception and Computing (CRIPAC), and was Director General of the Institute (2000–2007). He has also served as Vice President of the Chinese Academy of Sciences (2015–2016). His current research interests include biometrics, image and video understanding, and information content security.

Dr. Tan is a Fellow of the CAS, TWAS (The World Academy of Sciences for the advancement of science in developing countries), IEEE and IAPR, and an International Fellow of the UK Royal Academy of Engineering. He has served as an Associate Editor or member of the editorial board of several leading international journals, including IEEE Transactions on Pattern Analysis and Machine Intelligence (PAMI), IEEE Transactions on Automation Science and Engineering, Pattern Recognition Letters, and Image and Vision Computing.