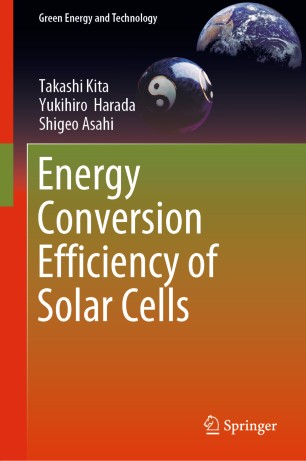 This book offers a concise primer on energy conversion efficiency and the Shockley-Queisser limit in single p-n junction solar cells. It covers all the important fundamental physics necessary to understand the conversion efficiency, which is indispensable in studying, investigating, analyzing, and designing solar cells in practice. As such it is valuable as a supplementary text for courses on photovoltaics, and bridges the gap between advanced topics in solar cell device engineering and the fundamental physics covered in undergraduate courses.

The book first introduces the principles and features of solar cells compared to those of chemical batteries, and reviews photons, statistics and radiation as the physics of the source energy. Based on these foundations, it clarifies the conversion efficiency of a single p-n junction solar cell and discusses the Shockley-Queisser limit. Furthermore, it looks into various concepts of solar cells for breaking through the efficiency limit given in the single junction solar cell and presents feasible theoretical predictions. To round out readers’ knowledge of p-n junctions, the final chapter also reviews the essential semiconductor physics.

The foundation of solar cell physics and engineering provided here is a valuable resource for readers with no background in solar cells, such as upper undergraduate and master students. At the same time, the deep insights provided allow readers to step seamlessly into other advanced books and their own research topics.

Takashi Kita is a Professor at Kobe University. He received his Doctor of Engineering degree from Osaka University in 1991. In 1990 he was appointed as Assistant Professor at Kobe University, and promoted to Associate Professor and his current position in 2000 and 2007, respectively. In 1996, he worked as a Visiting Researcher in the group led by Professor Hans-Joachim Queisser, Max-Plank Institute. His work is mainly concerned with the development of high-performance photonic devices, and has been recognized with the Japan Society of Applied Physics Fellow Award.

Yukihiro Harada is an Assistant Professor at Kobe University, where he received his Doctor of Engineering degree in 2009 and was appointed to his current position the same year. From 2016 to 2017, he worked as a Visiting Researcher in the group led by Dr. Nicholas J. Ekins-Daukes, Imperial College London, UK. His work is mainly concerned with the optical properties of semiconductor nanostructures. He is a member of the Japan Society of Applied Physics, the Physical Society of Japan, and the Optical Society of America.

Shigeo Asahi is a Project Assistant Professor at Kobe University. He received his Master of Engineering degree from the University of Tokyo in 2003. After working for a private company for ten years, he enrolled at Kobe University in 2013 and completed his PhD in 2016. He was appointed to his current position the same year. His work is mainly concerned with the development of high-efficiency solar cells.