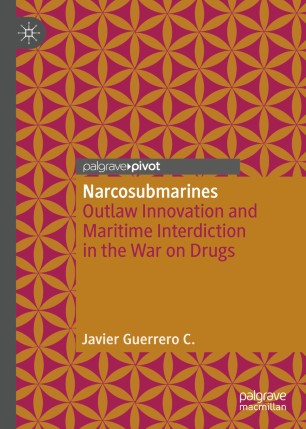 Outlaw Innovation and Maritime Interdiction in the War on Drugs

This book is about the encounters of Colombian drug smugglers and the Colombian Navy, both in the open seas and along coastlines. Javier Guerrero C. specifically examines the technologies involved in the War on Drugs, such as the narcosubmarines and patrol boats, the knowledge required to transport drugs and the knowledge required to stop the illicit flows. The author presents compelling new evidence for advancing an understanding of technological innovation in antagonist contexts, as well as the symbiotic and co-evolutionary character of the process of technological innovation in the War on Drugs. This book will appeal both to practitioners and scholars interested in the War on Drugs and the production of technologies in outlaw contexts.

Javier Guerrero C. is a lecturer at the Instituto Tecnológico Metropolitano, Medellín, Colombia and postdoctoral researcher at the Centro de Estudios de Seguridad y Drogas, Universidad de los Andes with the support of a postdoctoral scholarship from Colciencias. His research interests focus on the interplay between outlaw innovation, technology and security in the War on Drugs.