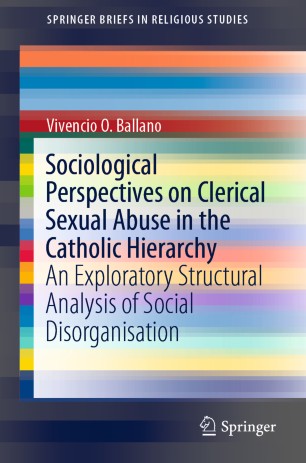 Sociological Perspectives on Clerical Sexual Abuse in the Catholic Hierarchy

Part of the SpringerBriefs in Religious Studies book series (BRIEFSRESTU)

Dr. Vivencio O. Ballano was a diocesan and Jesuit seminarian for 10 years and Theology professor in Catholic universities for 12 years before becoming a sociologist. Currently, he is Associate Professor V of the Department of Sociology and Anthropology and College Researcher-Manager of the College of Social Science and Development (CSSD) of the Polytechnic University of the Philippines (PUP), Manila, Philippines. He received his doctorate in Sociology from the Ateneo de Manila University and master’s degree in Theology from the Loyola School of Theology (LST), Ateneo de Manila University. He is the author of the two Scopus-indexed books: Sociological Perspectives on Media Piracy in the Philippines and Vietnam (2016) and Law, Normative Pluralism, and Post-Disaster Recovery: Evaluating the Post-Disaster Relocation and Housing of Typhoon Ketsana Victims in the Philippines (2017), all published by Springer Nature Singapore. His research interests include sociology of law, religion, media piracy, post-disaster management, and Catholic Social Teaching. He is currently working on his next project, also a Springer Brief in Religious Studies under Springer Nature Singapore, on Catholic Social Teaching and the common good using the sociological approach.