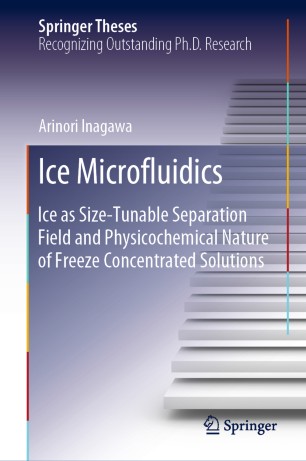 This book explores the possibility of using micro/nanostructures formed on the doped ice surface as a novel separation platform. In addition, it provides comprehensive information on the nature of freeze-concentrated solutions (FCSs) and the ice/FCS interface, which play important roles in the natural environment and industrial processes alike. The book proposes a novel size-selective separation approach using channels formed on the doped ice surface. The separation is based on the physical interaction of analytes with channel walls, which is controlled by varying the channel width through temperature and dopant concentration changes. It also shows the precise control of the channel width to be in a range of 200 nm–4 μm and demonstrates the size-selective separation of microspheres, cells, and DNA. The physicochemical properties of FCSs are measured to reveal the nature of the ice/FCS interface, and the zeta potentials of ice are measured by determining EOF rates in a microchannel fabricated in the ice. The deprotonation at OH dangling bonds and adsorption of ions are also discussed. The viscosities of FCSs confined in micro/nanospaces are evaluated by means of two spectroscopic methods. When an FCS is confined in small spaces surrounded by ice, the viscosity increases compared to that in a bulk solution. Interestingly, this viscosity enhancement occurs even though its size is on the micrometer scale. These parameters are essential to discussing the unique phenomena occurring in FCSs. This book provides an explanation of the scientific processes taking place in FCSs, and reveals the potential that frozen solutions hold as innovative micro/nanofluidic devices and reaction platforms.