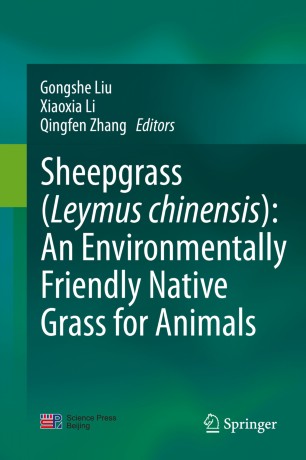 This book summarizes the latest research on sheepgrass, both in China and around the globe, as well as fundamental information on the topic. Sheepgrass (Leymus chinensis (Trin.) Tzvel) is a key species in the eastern part of the Eurasian steppe and widely distributed in northern China. It is highly adaptable and holds considerable value in terms of animal husbandry and ecology / the environment. Over the past thirty years, Chinese scientists have collected and evaluated a wealth of wild sheepgrass germplasm data, and extensive basic research has been conducted on the plant’s sexual reproduction, yield, quality, and resistance. In addition, methods for utilizing new varieties in different regions have been developed. This book describes the distribution and origin, breeding, cultivation, and sexual reproduction of sheepgrass. It also discusses recent advances concerning its nutrient and water absorption and applications, grazing resistance mechanism, and gene resources mining.

Gongshe Liu studied agronomy at Northwest Agriculture and Forestry University in China (1978-1982). From 1982-1986, he studied at the the Universite de Clermont II  and the CNRS in France, and received a Ph.D. in Plant biology and Physiology. Dr. Liu was subsequently a postdoctoral fellow at the Chinese Academy of Sciences (1986-1988). He has been working at the Institute of Botany of the Chinese Academy of Sciences since 1989, and is currently the group leader for Grass Genetic Resources and Molecular Breeding. Dr. Liu has engaged in 973 national key research projects, key national transgenic projects, NSFC projects, Chinese Academy of Sciences major and key projects, and many other commissioned projects. He is a member of the Chinese Academy of Sciences "Road-map up to 2050" group of experts, is an expert for the National Grass Germplasm resources, and Chairman of the Chinese Grassland Society biotechnology committee. He has published over 80 academic papers in various journals including the Journal of Plant Biotechnology, Journal of Experimental Botany, Plant and Cell Physiology, and BMC Genomics, has filed 18 Chinese patents, and has developed three new varieties of Leymus chinensis var. Zhongke 1, 2 and 3. Dr. Liu was awarded first prize by Beijing Science and Technology, and the first prize for science and technology by the Chinese Grassland Society.

Qingfen Zhang is a doctoral graduate student at the Institute of Botany, Chinese Academy of Sciences, and is an expert at the Renewable Energy Center at the National Development and Reform Commission’s Energy Research Institute, Internet Society of China, and China Quality Certification Center special expert. He has been engaged in research on technology and policy in the related fields of biological industry for over 10 years. As Head of the project and a key member of the national and provincial level projects, Qingfen Zhang has participated in research on more than 50 major strategic, planning and policy issues. He has participated in the writing of more than 10 books, and over 10 papers published in leading journals. Qingfen Zhang has also completed extensive research reports, and received the People’s Government of Beijing Science and Technology Research third prize, the National Energy Administration Soft Science Research second prize, and other provincial and ministerial level scientific and technological achievement awards.