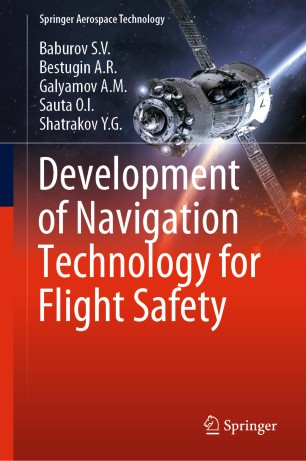 This book highlights practical solutions for flight safety improvement techniques, which are currently the focus of the International Civil Aviation Organization (ICAO). It has become clear that, in order to rapidly and significantly improve flight safety, the integrated use of new aeronautical technologies is called for. Considering the size of the aviation fleet, its constant growth and the long service lives of aircraft, new technologies should be adapted both to cutting-edge air navigation systems and to those that have been used for over a decade.

Baburov Sergey Vladimirovich, Candidate of Technical Sciences, was born in 1984. He is the author of more than 82 scientific papers, including 4 patents for inventions in the field of radio technical systems; expert in the field of system analysis, on-board radio communication systems, navigation and air traffic control; First Deputy General Director of JSC “Navigator” for the development and production of a wide range of on-board integrated avionics.

Bestugin Alexander Roaldovich, Professor, Doctor of Technical Sciences, was born in 1960. He is the Director of the St. Petersburg State University of Aerospace Instrumentation Second Institute, Head of the “Design Process for Electronic and Laser aids” Department, author of more than 100 scientific papers, including 11 monographs, 4 patents for inventions in the field of radio technical aids, research supervisor of the section for multifunctional aircraft flight control systems.

Galyamov Andrey Mikhailovich, Candidate of Technical Sciences, was born in 1987. He is the author of more than 50 scientific papers, including 2 patents for inventions in the field of radio technical systems; General Director of NNC Consulting LLC, Interstate Aviation Committee expert-auditor, Rosaviation expert-auditor, Head of the testing laboratory, RTCA and EUROCAE member, expert in testing radio-electronic complexes and improving flight safety for all types of aircraft.

Sauta Oleg Ivanovich, Doctor of Technical Sciences, was born in 1960. He is the author of more than 100 scientific papers, including 20 patents for inventions in the field of radio technical systems for satellite navigation, landing and safety enhancement systems. He graduated from Leningrad State University, specializing in radiophysics (1983). He defended his candidate thesis in 1991 and doctoral thesis in 2012. He is an expert in the field of aviation radio technical systems for navigation and landing, founder of the scientific field of ergatic complexes for displaying navigational information and external environment for improving flight safety and reducing the meteorological minimum. He is the Deputy Chief Designer of the first Russian series-produced on-board ground proximity warning systems and satellite-based landing systems for all types of aircraft.

Shatrakov Yury Grigorievich, Professor, Doctor of Technical Sciences, Honored Science Worker of Russia, Laureate of State and St. Petersburg Government Prizes, RATS full member, graduated from Leningrad Institute of Aviation Instrumentation and Leningrad University (Physics and Mathematics Faculty). He was a full-time postgraduate student at All-Russian Scientific Research Institute of Radio Equipment. He defended his thesis in 1966. He published 52 monographs and textbooks on radio navigation, radiolocation, production organization. He prepared more than 100 candidates and doctors of science as a scientific adviser and scientific consultant. Scientific directions founded under the guidance of Yu.G. Shatrakov are as follows: relative radio navigation; increased noise immunity of angle measuring systems due to suppression of correlation errors and interference; secondary radiolocation by individual numbers; reduction of labor intensity in the production of radio electronic products due to the introduction of flexible automated productions. He is the author of more than 400 scientific works, including 30 patents for inventions in the field of radio technical systems; Head of the industry (45 enterprises and research institutes) for the creation of navigation, landing and ATM (1978–1988) aids; scientific supervisor of international projects for the creation of the MLS with Thomson-CSF (1980–1988), with US enterprises for the creation of joint LRNSs (long-range radio technical navigation systems) (Tropic-Loran) (1984), chief designer of on-board antenna-feed systems; founder of the correlation interference theory in aviation radio technical complexes and systems.