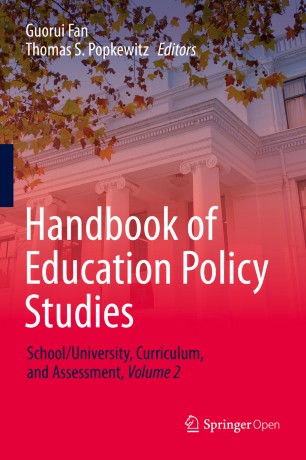 This open access handbook brings together the latest research from a wide range of internationally influential scholars to analyze educational policy research from international, historical and interdisciplinary perspectives. By effectively breaking through the boundaries between countries and disciplines, it presents new theories, techniques and methods for contemporary education policy, and illustrates the educational policies and educational reform practices that various countries have introduced to meet the challenges of continuous change.
This volume focuses on policies and changes in schools and classrooms. The studies on school changes present the differences in the policies and challenges of K-12 schools and universities in different countries and regions, and in connection with the contradictions and conflicts between tradition and modernization, as well as the changing roles of various stakeholders, especially that of teachers. In terms of curriculum and instruction, many countries have undertaken experiments and introduced changes based on two major themes: “what to teach” and “how to teach”. International education assessments represented by PISA not only promote the improvement and extensive application of educational assessment and testing techniques, but have also had far-reaching impacts on education policies and education reforms in many countries.
Focusing on the changes in educational policies at the micro level, this volume comprehensively reveals the complex interactions between school organizations, teachers, curricula, teaching and learning, evaluation and other elements within the education system, as well as the latest related reforms worldwide.

FAN Guorui, Ph.D, Professor of Education Theories and Policies, Institute of Schooling Reform and Development & Department of Education; Dean, School of Education Sciences, East China Normal University (2012-2014); Executive Director, the Professional Committee of Education Policy and Law, China Education Association (2007-); Chief-in-edition of the yearly book Education Policy Observatory(ECNU Press). Published more than 100 papers and several books, such as Theory and Practice of Education Policies (2011), The Change of Education System and Human Development (2008),School Administration: Theory and Practice (2003), The Ecology of Education (2000), etc.
Thomas S. Popkewitz is a curriculum theorist and professor from the United States of America, on the faculty at the University of Wisconsin–Madison School of Education. His studies are concerned with the knowledge or systems of reason that govern educational policy and research related to pedagogy and teacher education. His research includes histories of the present, ethnographic and comparative studies of national educational reforms in Asia, Europe, Latin America, Southern Africa, and the US. His book Cosmopolitanism and the Age of School Reform (2008) explores the systems of reason in pedagogy through historically examining the changing images and narratives of Enlightenment concerns with cosmopolitanism. He has written or edited approximately 30 books and 200 articles in journals and book chapters. Two of his books (Paradigms and Ideology in Educational Research and A Political Sociology of Educational Reform) have won awards for their contribution to educational studies. His work has been translated into twelve languages (Chinese, Danish, French, German, Greek, Hungarian, Japanese, Portuguese, Norwegian, Russian, Spanish and Swedish).