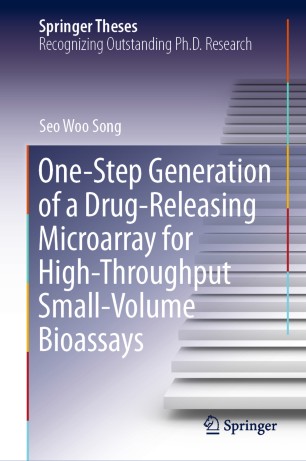 This thesis demonstrates a technology that enables pipetting-free high-throughput screening (HTS) on a miniaturized platform, eliminating the need for thousands of one-by-one pipetting and conventional liquid handling systems. This platform enhances accessibility to HTS and enables HTS to be used in small-to-medium scale laboratories. In addition, it allows large-scale combinatorial screening with a small number of valuable cells, such as patients’ primary cancer cells. This technique will have a high impact for widespread use of HTS in the era of personalized medicine.
In this thesis, the author firstly describes the need and concept of ‘partipetting’ for pipetting-free HTS platform. It is realized by the one-step pipetting and self-assembly of encoded drug-laden microparticles (DLPs) on the microwells. Next, the technical implementations required for the platform demonstration are described. It includes preparation of encoded DLPs, plastic chip fabrication, and realization of automated system. Lastly, screening of sequential drug combinations using this platform is demonstrated. This shows the potential of the proposed technology for various applications.

​Seo Woo Song earned PhD degree in the department of electrical and computer engineering from Seoul National University, Republic of Korea in 2019. His research interests are lab on a chip, bioMEMS, and micro-robotics.