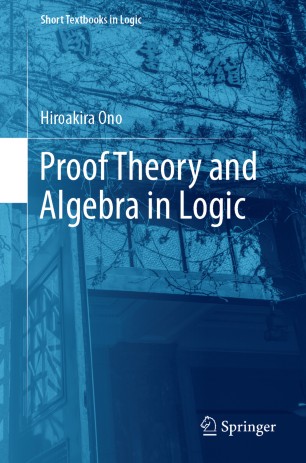 Proof Theory and Algebra in Logic

Part of the Short Textbooks in Logic book series (STXLO)

This book offers a concise introduction to both proof-theory and algebraic methods, the core of the syntactic and semantic study of logic respectively. The importance of combining these two has been increasingly recognized in recent years. It highlights the contrasts between the deep, concrete results using the former and the general, abstract ones using the latter. Covering modal logics, many-valued logics, superintuitionistic and substructural logics, together with their algebraic semantics, the book also provides an introduction to nonclassical logic for undergraduate or graduate level courses.
The book is divided into two parts: Proof Theory in Part I and Algebra in Logic in Part II. Part I presents sequent systems and discusses cut elimination and its applications in detail. It also provides simplified proof of cut elimination, making the topic more accessible. The last chapter of Part I is devoted to clarification of the classes of logics that are discussed in the second part.  Part II focuses on algebraic semantics for these logics. At the same time, it is a gentle introduction to the basics of algebraic logic and universal algebra with many examples of their applications in logic. Part II can be read independently of Part I, with only minimum knowledge required, and as such is suitable as a textbook for short introductory courses on algebra in logic.