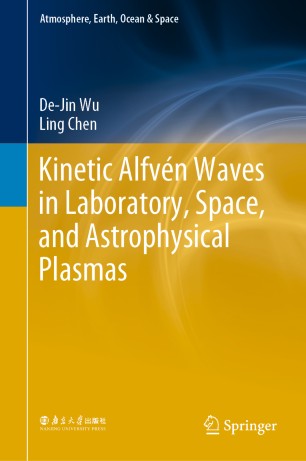 This book provides a systematic introduction to the observation and application of kinetic Alfven waves (KAWs) in various plasma environments, with a special focus on the solar-terrestrial coupling system. Alfven waves are low-frequency and long-wavelength fluctuations that pervade laboratory, space and cosmic plasmas. KAWs are dispersive Alfven waves with a short wavelength comparable to particle kinematic scales and hence can play important roles in the energization and transport of plasma particles, the formation of fine magneto-plasma structures, and the dissipation of turbulent Alfven waves.

Since the 1990s, experimental studies on KAWs in laboratory and space plasmas have significantly advanced our understanding of KAWs, making them an increasingly interesting subject. Without a doubt, the solar–terrestrial coupling system provides us with a unique natural laboratory for the comprehensive study of KAWs. This book presents extensive observations of KAWs in solar and heliospheric plasmas, as well as numerous applications of KAWs in the solar-terrestrial coupling system, including solar atmosphere heating, solarwind turbulence, solar wind-magnetosphere interactions, and magnetosphere-ionosphere coupling.

In addition, for the sake of consistency, the book includes the basic theories and physical properties of KAWs, as well as their experimental demonstrations in laboratory plasmas. In closing, it discusses possible applications of KAWs to other astrophysical plasmas. Accordingly, the book covers all the major aspects of KAWs in a coherent manner that will appeal to advanced graduate students and researchers whose work involves laboratory, space and astrophysical plasmas.

Dr. De-Jin Wu, after receiving his undergraduate education at Anhui University, completedhis MS and PhD degrees at Beijing Normal University and the CAS (Chinese Academy of Sciences)Purple Mountain Observatory, respectively. The author of numerous papers and a participant in a number of research programs, he is currently the lead researcher in the Solar and Heliospheric Plasmas Group at Purple Mountain Observatory, and a professor at the USTC (University of Science and Technology of China)School of Astronomy and Space Science. His major research interests are in KAWs in space and solar plasmas, as well as the inhomogeneous heating of solar coronal plasmas and solar radio bursts.

Dr. Ling Chen graduated from the CAS (Chinese Academy of Sciences) Purple Mountain Observatory and received her PhD degree in Astrophysics in 2011. She is currently an associate researcher at Purple Mountain Observatory and an associate professor at the USTC (University of Science and Technology of China) School of Astronomy and Space Science. Her major researches interests are in KAWs in the solar atmosphere and space plasmas.