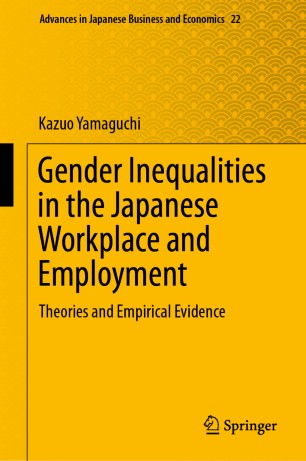 Gender Inequalities in the Japanese Workplace and Employment

Part of the Advances in Japanese Business and Economics book series (AJBE, volume 22)

The in-depth analyses presented in this book have a dual focus: (1) Social mechanisms through which the gender wage gap, gender inequality in the attainment of managerial positions, and gender segregation of occupations are generated in Japan; and (2) Assessments of the effects of firms’ gender-egalitarian personnel policies and work–life balance promotion policies on the gender wage gap and the firms’ productivity.

In addition, this work reviews and discusses various economic and sociological theories of gender inequality and gender discrimination and considers their consistencies and inconsistencies with the results of the analysis of Japanese data.  Furthermore, the book critically reviews and discusses the historical development of the Japanese employment system by juxtaposing rational and cultural explanations.

This book is an English translation by the author of a book he first published in Japanese in 2017. The original Japanese-language edition received two major book awards in Japan. One was The Nikkei Economic Book Culture Award, which is given every year by the Nikkei Newspaper Company and the Japan Economic Research Center to a few best books on economy and society. The other was The Showa University’s Women’s Culture Research Award, which is bestowed annually on a single book of research that promotes gender equality.

Kazuo Yamaguchi is the Ralph Lewis Professor of Sociology at the University of Chicago.