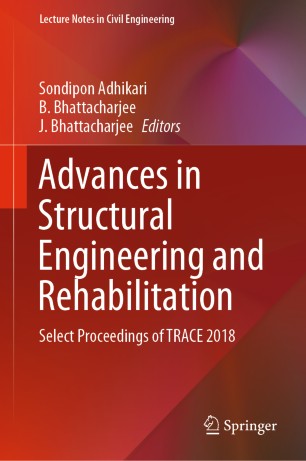 Advances in Structural Engineering and Rehabilitation

This book comprises select papers presented at the International Conference on Trends and Recent Advances in Civil Engineering (TRACE 2018). The book covers a wide range of topics related to recent advancements in structural engineering, structural health monitoring, rehabilitation and retrofitting of structures, and earthquake-resistant structures. Based on case studies and laboratory investigations, the book highlights latest techniques and innovative methods for building repair and maintenance. Recent development in materials being used in structural rehabilitation and retrofitting is also discussed. The contents of this book can be useful for researchers and professionals working in structural engineering and allied areas.

Dr. Sondipon Adhikari is a professor at the College of Engineering, Swansea University. He graduated in civil engineering from Bengal Engineering and Science University, Shibpur, Kolkata in 1995 and then completed his M.S. from the Indian Institute of Science, Bangalore in 1997. He obtained his Ph.D. in 2001 from Trinity College, University of Cambridge. He is a recipient of the Wolfson Research Merit Award from the Royal Society and the Philip Leverhulme Prize. Since 2015, he has been a distinguished Visiting Professor at the University of Johannesburg. Dr. Adhikari is currently the Chair of Aerospace Engineering at the College of Engineering, Swansea University, and a fellow of the Royal Aeronautical Society. He has published over 280 articles in peer reviewed international journals and has a h-index of 50 in Scopus.

Dr. B. Bhattacharjee is a professor in the Department of Civil Engineering, Indian Institute of Technology, Delhi. After completing his B.Tech. from IIT Kharagpur in 1978, he worked for a short period for Gammon India Limited. Subsequently, he obtained his M.Tech. and Ph.D. from IIT Delhi in 1982 and 1990, respectively. His research interests include corrosion of rebar in concrete, high-performance concrete, microstructure modeling of concrete, chloride ingress, service life prediction and life cycle costing of concrete structures, condition evaluation and health monitoring of structures. He has published 185 articles in international and national journals and conferences. He is on the editorial board of several journals, and is also a Life Member of the Indian Concrete Institute, Indian Society for Construction Materials and Structure, Indian Society for Technical Education, and the American Society of Civil Engineers-India Section (ASCE-IS).

Dr. J. Bhattacharjee is a professor and adviser in the Civil Engineering department of Amity University, Noida since 2012. He is a former Chief Engineer and Joint Director General, Ministry of Defense. He obtained his bachelors in civil engineering from Bengal Engineering College, Shibpur, Kolkata, M.Tech. from IIT Madras, and M.Phil. from Madras University. He did his Ph.D. in disaster management. He has a vast experience of over 46 years in the industry in planning, designing and execution of various types of civil engineering works including about 5 years in the multinational consultancy organization Gherzi Eastern Ltd. He has also published about 100 articles in various national and international journals and conferences. Dr. Bhattacharjee received two prestigious Awards for Excellence from Indian Building Congress. He has also developed and taught a number of new courses at the graduate and postgraduate levels at Amity University. He is a Life Member of 16 technical bodies in India and abroad, and is a governing council member of the Indian Building Congress. He has authored a book entitled Concrete Structures – Repair, Rehabilitation and Retrofitting.