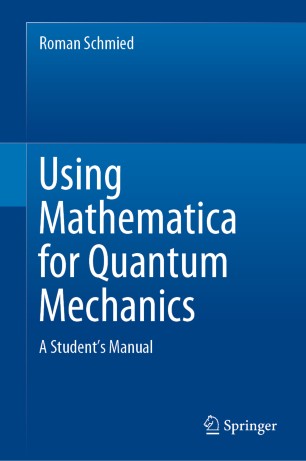 This book revisits many of the problems encountered in introductory quantum mechanics, focusing on computer implementations for finding and visualizing analytical and numerical solutions. It subsequently uses these implementations as building blocks to solve more complex problems, such as coherent laser-driven dynamics in the Rubidium hyperfine structure or the Rashba interaction of an electron moving in 2D. The simulations are highlighted using the programming language Mathematica. No prior knowledge of Mathematica is needed; alternatives, such as Matlab, Python, or Maple, can also be used.

PD Dr. Roman Schmied studied physics at the École Polytechnique Fédérale de Lausanne and the University of Texas at Austin. He wrote his diploma thesis on helium nanodroplet spectroscopy at Princeton University with Kevin Lehmann and Giacinto Scoles, and later obtained his Ph.D. from the same group, working on the superfluidity of helium nanodroplets and on the spectroscopy of molecules solvated within these droplets. He carried out his postdoctoral work at the Max Planck Institute of Quantum Optics in Garching, Germany, where he first began working with quantum simulators and quantum simulations. After a short stay at the NIST ion storage group in Boulder, USA, he took on his current position at the University of Basel, where he was habilitated in 2017. Since 2016 he has also been working at the University’s Human Optics Lab, where he is currently using digital technology for child health, particularly eye health.