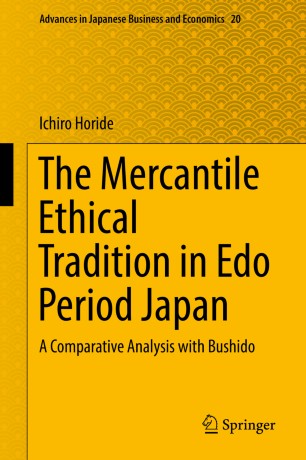 A Comparative Analysis with Bushido

Part of the Advances in Japanese Business and Economics book series (AJBE, volume 20)

This book demonstrates that during Japan’s early modern Edo period (1603–1868) an ethical code existed among the merchant class comparable to that of the well-known Bushido. There is compelling evidence that contemporary merchants, who were widely and openly despised as immoral by the samurai, in fact acted in highly ethical ways in accordance with a well-articulated moral code.

Japanese society was strictly stratified into four distinct and formally recognized classes: warrior, farmer, craftsman and merchant. From the warriors’ perspective, the merchants, at the base of the social order, had no virtue, and existed only to skim profits as middlemen between producers and consumers. But were these accusations correct? Were the merchants really unethical beings who engaged in unfair business practices? There is ample evidence that negates the ubiquitous slanders of the warrior class and suggests that merchants – no less than the warriors – possessed and acted in accordance with a well-developed ethical code, a spirit that may be called shonindo or “The Way of the Merchant.”

This book examines whether a comparison of shonindo, depicting the ethical point of view of the merchant class, and Bushido, embodying that of the warrior class, reveals that shonindo may have in fact surpassed Bushido in some aspects. Comparing contemporarily published historical documents concerning both shonindo and Bushido, as well as Inazo Nitobe’s classic work Bushido: The Soul of Japan, published in 1900, the author examines how Bushido surpassed shonindo in that warriors were willing to die for their strict ethical code. Shonindo, however, may have surpassed Bushido in that merchants were liberal, willing to expand and extend application of their ethical beliefs into all aspects of everyday life for the overall benefit of society. This ethical code is compared with that of the conservative Bushido, which demonstrably proved not up to the task for the modernization and improved well-being of Japan.