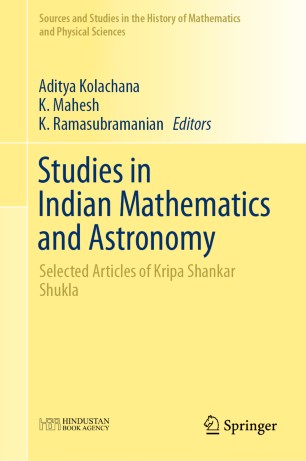 Studies in Indian Mathematics and Astronomy

This volume presents a collection of some of the seminal articles of Professor K. S. Shukla who made immense contributions to our understanding of the history and development of mathematics and astronomy in India. It consists of six parts: Part I constitutes introductory articles which give an overview of the life and work of Prof. Shukla, including details of his publications, reminiscences from his former students, and an analysis of his monumental contributions. Part II is a collection of important articles penned by Prof. Shukla related to various aspects of Indian mathematics. Part III consists of articles by Bibhutibhusan Datta and Avadhesh Narayan Singh—which together constitute the third unpublished part of their History of Hindu Mathematics—that were revised and updated by Prof. Shukla. Parts IV and V consist of a number of important articles of Prof. Shukla on different aspects of Indian astronomy. Part VI includes some important reviews authored by him and a few reviews of his work.

Given the sheer range and depth of Prof. Shukla’s scholarship, this volume is essential reading for scholars seeking to deepen their understanding of the rich and varied contributions made by Indian mathematicians and astronomers.

“The book is highly recommended not only for those who seek to deepen their understanding of ancient and medieval Indian mathematics and astronomy but also for those who want to have a glimpse of it for their general interest.” (Dipak Jadhav, Mathematical Reviews, May, 2020)