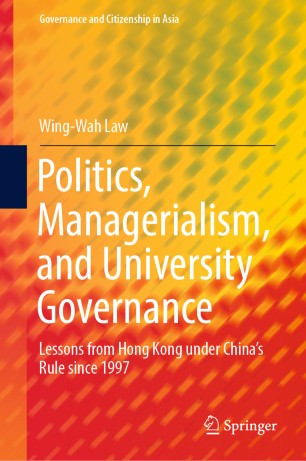 Lessons from Hong Kong under China’s Rule since 1997

Part of the Governance and Citizenship in Asia book series (GOCIA)

This book explores the interplay between politics, managerialism, and higher education, and the complex linkages between politics and public universities in Hong Kong. Since the mid-20th century, literature on the state, market, and higher education has focused on the state’s shifting role from the direct administration to the supervision of higher education, and its increased use of market and managerial principles and techniques to regulate public universities. However, very few studies have addressed the political influences on university governance produced by changing state-university-market relationships, the chancellorship of public universities, or students’ and academics’ civic engagement with regard to sensitive political issues.
The book examines both the positive and problematic outcomes of using market principles and managerialism to reform public higher education; questions the longstanding tradition of university chancellorship; explores the issue of external members holding the majority on university governing boards; probes into the dilemma of either relying on the system or a good chancellor and external members to preserve universities’ autonomy and academic freedom; and assesses the cost of students’ and academics’ civic engagement with regard to politically sensitive issues.