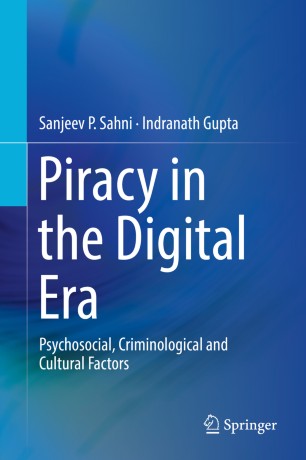 Piracy in the Digital Era

This book builds an empirical basis towards creating broader prevention and intervention programs in curbing digital piracy. It addresses the psychosocial, cultural and criminological factors associated with digital piracy to construct more efficient problem-solving mechanisms. Digital piracy including online piracy involves illegal copying of copyrighted materials. This practice costs the software industry, entertainment industry, and governments billions of dollars every year. Reports of the World Intellectual Property Organization (WIPO) and Business Software Alliance (BSA) view piracy largely in the light of economic factors; the assumption being that only those who cannot afford legitimate copies of software, music, and movies indulge in it. Drawing on research and theories from various disciplines like psychology, sociology, criminology, and law, the authors have designed an empirical study to understand the contribution of psychological, cultural and criminological factors to digital piracy. The chapters include data from India and China, which continue to be on the Special 301 report priority watch list of the WIPO, and Serbia, which has been on the watch list 4 times. They examine the role of self-control, self-efficacy, perceived punishment severity, awareness about digital piracy, peer influence, neutralization techniques, novelty seeking, pro-industry factors and other socio-demographic factors in predicting digital piracy.

This book addresses a large readership, comprising academics and researchers in psychology, criminology and criminal justice, law and intellectual property rights, social sciences, and IT, as well as policymakers, to better understand and deal with the phenomenon of digital piracy.

Dr. Sanjeev P. Sahni is Principal Director and Professor at Jindal Institute of  Behavioral Science, O.P. Jindal Global University (JGU). He is the Director of two research-based institutes: the Centre for Victimology and Psychological Studies, and the Centre for Leadership and Change. He is also serving as Special Advisor to the Vice Chancellor at JGU. Professor Sahni holds a PhD and post-graduate degree in psychology with a specialization in criminal psychology from Punjab University, Chandigarh. His research interests lie in the areas of organizational behavior, infidelity, technology and couples, cyber psychology, criminal psychology, and gender-based violence. Professor Sahni served as a scientist at the Sports Authority of India for 14 years, where he established performance enhancement centers for training in psychological skills. He has developed special educational training programmes for sportspersons army officers, administrative officers, human resources personnel, and government officials on stress management and performance enhancement, emotional enhancement, leadership and biofeedback. He has been a visiting scientist at the University of Houston and the University of Illinois, USA, and has worked as a social scientist with the Post Graduate Institute of Medical Education and Research, Chandigarh. Before joining O.P. Jindal Global University, Professor Sahni was Head, Education, at Jindal Steel and Power Limited (JSPL). Part of the USD15 billion O.P. Jindal Group. After successfully leading the HR functions of the organizations for four years, in 2010 he was entrusted with another challenging role of Head-Education. He has managed various educational institutes run by JSPL, which include O.P. Jindal Global University, Jindal Institute of Technology , Jindal Institute of Power Technology, four Community Colleges of Technology and Skills, three Industrial Training Institutes, medical college, physiotherapy courses, and 10 schools. Professor Sahni also worked as Co-Project Director of the Montgomery College, India, initiative, Transforming Boundaries, funded by the US State Department and USIEF. He has authored, co-authored, edited and reviewed many books and research papers on the death penalty, euthanasia, internet infidelity, perceptual organization of criminals, performance enhancement of sportsmen, stress management, etc. He has been awarded fellowships by the Indian Association of Sports Medicine, Sports Psychology Association of India, and the Indian Council of Medical Research.

Dr. Indranath Gupta is an Associate Research Professor and Assistant Director of the Centre for Postgraduate Legal Studies and the Centre for Intellectual Property and Technology Law. He is a co-director of JIRICO, Assistant Dean (Student Initiatives), and a Senior Fellow at the Jindal Institute of Behavioural Sciences (JIBS). Dr. Gupta received his LL.B. degree from the University of Calcutta, India; holds an LLM with distinction from the University of Aberdeen, UK; and a postgraduate research LLM in Computer Law from the University of East Anglia, UK. He obtained his Ph.D. from Brunel University, London, UK. Dr. Gupta has been involved in qualitative and quantitative research. He was appointed as the research collaborator by the Università Bocconi, Milan, Italy, for a project funded by the European Commission under the 7th Framework Programm, and he is actively involved in a research project on copyright with researchers in  Nanyang Technological University in Singapore. Dr. Gupta has also worked as an advocate in a solicitor’s firm at the Calcutta High Court. He has published in European and Indian law journals and has spoken at international conferences and seminars. His research areas include database right, copyright, data protection, cyber law and the interface of IP and competition law.