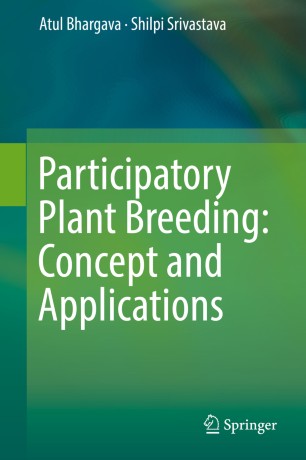 Plant breeding has played a significant role in the development of human civilizations. Conventional plant breeding has significantly improved crop yield by genetically manipulating agronomically important traits. However, it has often been criticized for ignoring indigenous germplasm, failing to address the needs of the marginal and the poor farmers, and emphasizing selection for broad instead of local adaptation. Participatory plant breeding (PPB) is the process by which the producers and other stakeholders are actively involved in a plant-breeding programme, with opportunities to make decisions throughout. The Working Group on Participatory Plant Breeding (PPBwg) was established in 1996 under the framework of the Consultative Group on International Agricultural Research (CGIAR). Research in PPB can promote informed participation and trust in research among consumers and producers, and in recent years, PPB has had a significant impact on food production by quickly and cost-effectively producing improved crop varieties. At the same time, there has been significant  research in the area. PPB offers significant advantages that are particularly relevant to developing countries where large investments in plant breeding have not led to increased production, especially in the marginal environments. In addition to the economic benefits, participatory research has a number of psychological, moral, and ethical benefits, which are the consequence of a progressive empowerment of the farming communities. PPB can empower groups such as women or less well-off farmers that are traditionally left out of the development process.
This book explores the potential of PPB in the coming decades. The topic is more relevant since international breeding efforts for major crops are aimed at decentralizing local breeding methods to better incorporate the perspective of end users into the varietal development process. The first book incorporating the upcoming research on this novel breeding approach, it reviews the important tools and applications of PPB in an easy-to-read, succinct format, with illustrations to clarify these complex topics. It provides readers with a basic idea of participatory plant breeding as well as advances in the field and insights into the future to facilitate the successful integration of farmers into breeding programmes.
This book is a valuable reference resource for agriculturists, agricultural advisers, policy makers, NGOs, post-doctoral students and scientists in agriculture, horticulture, forestry and botany.

Dr. Atul Bhargava completed his PhD at the Division of Genetics and Plant Breeding, National Botanical Research Institute, Lucknow (CSIR-NBRI), Lucknow in 2005 on the topic ‘Genetic Divergence and Cytological studies in Chenopodium spp.’. He then joined the Laboratory of Cellular and Molecular Cytogenetics, University of Delhi as a Research Associate. He is currently an Assistant Professor at Amity Institute of Biotechnology, Amity University Uttar Pradesh (Lucknow Campus). Dr. Atul Bhargava has more than 18 years of research experience in the field of breeding crops like Chenopodium, Amaranthus, Aegle marmelos, Linum usitattisimum and Moringa oleifera. His work has been published in numerous high impact journals (46 publications). He has also authored a number books published by reputed publishers like CABI, CRC and Nova Sci. Pub.

Dr. Shilpi Srivastava completed her PhD in Biotechnology (Specialization: Nanobiotechnology) in 2013 and is currently an Assistant Professor (Biotechnology) at Amity Institute of Biotechnology, Amity University Uttar Pradesh (Lucknow Campus). An expert in agro-biotechnology with more than 13 years of research and teaching experience she has published 3 books, numerous papers in peer-reviewed journals, and several book chapters. She has also presented her research work at various national and international conferences. Her interests include teaching plant science, plant biotechnology, economic botany and nanobiotechnology to undergraduate and postgraduate students.