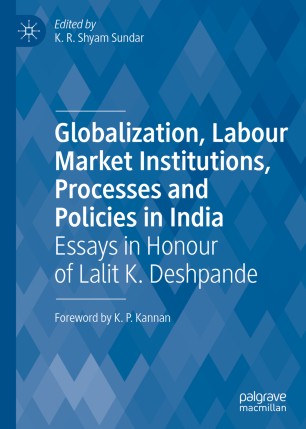 This book explores the effects of product market and labour market reforms on firms, labour institutions and labour rights in the economic and industrial relations system in India. India has over the years liberalized its economy through a broad range of reforms concerning the product market and complementing these it has also sought to reform the labour market and the industrial relations system. The book assesses the impact of these reforms on both the formal and informal labour markets in India, critically examines the labour processes and uncovers/describes precarious conditions of labour in various industries and occupations, and analyzes the dynamics involved in the making of industrial, employment and labour policies in contemporary India.

K. R. Shyam Sundar, Professor, XLRI, Xavier School of Management, Jamshedpur, India. Dr Shyam Sundar has published over sixty research articles in prominent journals, thirteen books (including three as an editor), and more than forty articles on Industrial Relations and Labour Economics.  He has conducted several projects for the ILO, European Union, etc. and serves on the Editorial Board of the Indian Journal of Labour Economics and Amity Journal of Economics.
Contributors:

“An excellent compendium of studies, analysing the course and consequences of many unforeseen developments in India’s labour market during the post- independent era.  They bring to light that an Industrial Relations System, as it evolved in India, failed to fulfil the expectations placed on it to guarantee secure income and dignified living conditions to all in the world of work.  The articles included in this volume (almost all of them) are torch-bearers of a great intellectual tradition set in motion by L.K. Deshpande.  They delve into an array of topics such as the rise of a gig economy, informality, contractual work, precarious jobs, gender disparities, and diminution of bargaining strength in most industries and occupations. They provide an insightful assessment of the means of action for correcting structural imbalances arising in the world of work.” (A. V. Jose, Former Senior Official, International Labour Organization, Geneva; Senior Consultant, Gulati Institute of Finance and Taxation, Thiruvananthapuram, Kerala, India)

“Impressive economic growth in India has not brought commensurate improvement in employment conditions. And India’s labour regulations and institutions are widely blamed for this apparent disconnect between growth and employment. The essays in this volume critically examine both of these propositions. They take a fresh view of the relevant facts and develop fresh perspectives. The volume is a must-read for all those who are interested in understanding India’s employment problem and a fitting tribute to Prof. Lalit Deshpande who pioneered research in these areas.” (Ajit K Ghose, Former Senior Economist, International Labour Organization, Geneva; Visiting Professor, The Institute for Human Development, New Delhi, India; National Fellow at the Indian Council of Social Science Research (ICSSR), New Delhi, India)

“Labour market institutions and processes have been a highly under researched topic in India. Professor L.K. Deshpande has been one of the scholars who pioneered research in this area. This edited volume in honour of Professor L.K. Deshpande by Dr. K.R. Shyam Sundar covers some important contemporary analytical and policy issues, particularly relating to informal employment and trade unions. It is an important contribution on this theme and will be of wide interest for the researchers, policy makers and other professionals.” (Alakh N. Sharma, Director, Institute for Human Development, Delhi, India; Editor, Indian Journal of Labour Economics)

“The Indian economy is both large (approximately 500 million workers) but also deeply segmented on numerous dimensions, including gender, caste, religion, geographical origin (rural and urban), etc. India is also characterized by a great deal of precarious work, not only in the informal sector but also in the formal sector, as the Indian state has been under considerable pressure to liberalize, privatize and globalize the economy.  This book advances our understanding of precarious work in India through an impressive array of chapters that examine the segmentation of the Indian labour market as well as a wide range of other important issues related to precarious work in India.  This valuable book is a welcome addition to the growing literature on precarious work.” (Arne L. Kalleberg, Kenan Distinguished Professor of Sociology, University of North Carolina at Chapel Hill, USA)

“This book honouring Professor Lalit Deshpande as one of India’s first labour economists provides a timely review of trends and patterns in labour, employment and productivity in India over the last two decades.  In their sweep and depth, the essays are an apt tribute to a scholar whose range of interests has been vast and deep, someone who demonstrated the ability to focus on the detail while not losing sight of the big picture.  A gentle, genial and warm person, one cannot think of Lalit Deshpande without his companion and co-author Sudha, an equally dedicated scholar. I see these two volumes as an homage to their long-standing partnership and dedication to the cause of workers and their labour.” (Ashwini Deshpande, Professor, Delhi School of Economics, University of Delhi, India)

“L.K. Deshpande has made a wide variety of contributions to labour studies in India over many decades. He greatly added to our understanding of the informal sector in an early study in Bombay, following this up later with research into labour market flexibility, in both cases carrying out and using innovative surveys. He has always believed that labour markets could not be understood without an understanding of the institutions on which they were based, and was highly critical of simplistic neo-classical models. So it is entirely fitting that Shyam Sundar has put together a collection of articles in his honour in this book.  The articles in this book carry on his critical perspectives in the analysis of diverse aspects of labour markets and industrial relations.  This is a book that anyone interested in labour studies in India will want to have on their shelves.” (Gerry Rodgers, Former Director, International Institute for Labour Studies, Geneva.)

“This book is a must for anyone who wants to understand the Indian labour market and the factors determining the life conditions of Indian workers. It is novel by combining labour market theory with institutional economics and the economic analysis of law.” (Hans-Bernd Schäfer, Affiliate Professor, Bucerius Law School, University of Hamburg; Former Director, The Institute of Law and Economics, University of Hamberg; Former President of the European Association of Law & Economics from 2004–2007, Hamberg, Germany)

“This book is a treasure trove of rich empirical studies by leading scholars on labour institutions, and on trends in India's labour markets, breaking new ground or setting new benchmarks. It is a fitting tribute to the lifelong scholarship of Lalit Deshpande.” (John Harriss, Professor of International Studies and Director of the School for International Studies, Simon Fraser University, Vancouver)

“Professor L.K. Deshpande is among the doyens of Labour Economics in India and has contributed immensely to the development of the discipline. He belongs to the select leading lights among Indian academics who have been relentless in their quest for an egalitarian and just India. The book engages with several important themes central to Deshpande’s academic canvas such as informality, precarity, industrial relations, jobless growth, labour and employment policies and they are indeed of great contemporary relevance and provide important windows to several aspects of India’s political economy.  The volume bearing contributions from well-known and eminent scholars is a fitting tribute to the scholarship and concerns of L.K. Deshpande as contributors have done very well in engaging with the contemporary debates and pushing their boundaries. Policy makers, scholars, students and activists, interested in the world of work, will find this volume extremely worthwhile.” (Praveen Jha, Professor, Centre for Economic Studies and Planning,School of Social Sciences, Jawaharlal Nehru University, India)

“This collection of essays edited by Prof. Shyam Sundar has left a deep impression on me. As a business practitioner and a Member of the Governing Body of the ILO, it was fascinating for me to read the academic view on issues which I grapple with on a daily basis : issues of informalization and precarious work, flexibilities or the lack of it in the job market, the impact of technology, globalization, demographics and migration on the future of work, the workplace and workers….the human aspects of the platform and gig economies, the battle for workers rights, jobless growth, and various other dynamics of the labour ecosystem.  These essays both raise questions and answer some, but what they do above all is to give insights and provoke further thought on issues that will be critical to the future of humanity.” (Rajeev Dubey, Member, Governing Body, ILO, Geneva)

“Prof. L.K. Deshpande is the most distinguished labour economist in India. He has a good combination of excellence in both teaching and research. I compliment Prof. K.R. Shyam Sundar for bringing out essays in honour of such a distinguished labour economist like Prof. L.K. Deshpande. The edited book contains articles contributed by well-known scholars on labour, employment, labour institutions and industrial relations. One can learn a lot on this subject from the articles included in this volume. This volume is also timely as the country has been discussing on employment growth and labour market reforms. This book is an important addition to the literature on labour market, labour institutions and industrial relations and useful for researchers, policy makers and those interested in labour and employment policies. The volume is a fitting tribute to Prof. L.K. Deshpande who has been a source of inspiration to many of us.” (S. Mahendra Dev, Director and Vice Chancellor, Indira Gandhi Institute for Development and Research (IGIDR), Mumbai, India)