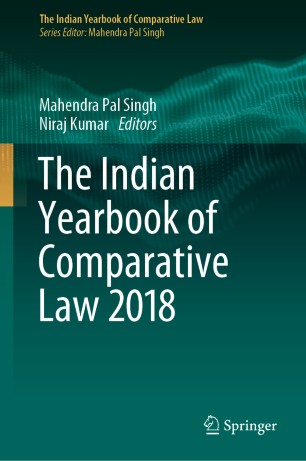 The Indian Yearbook of Comparative Law 2018

This yearbook is a compilation of thematically arranged essays that critically analyse emerging developments, issues, and perspectives across different branches of law. It consists of research from scholars around the world with the view that comparative study would initiate dialogue on law and legal cultures across jurisdictions. The themes vary from jurisprudence of comparative law and its methodologies to intrinsic details of specific laws like memory laws. The sites of the enquiries in different chapters are different legal systems, recent judgements, and aspects of human rights in a comparative perspective. It comprises five parts wherein the first part focuses on general themes of comparative law, the second part discusses private law through a comparative lens, and the third part examines aspects of public law with special focus on constitutional law, human rights and economic laws. The fourth part engages with criminal law and the last part of the book covers recent developments in the field of comparative law. This book intends to trigger a discussion on issues of comparative law from the vantage point of Global South, not only focusing on the Global North. It examines legal systems of countries from far-east and sub-continent and presents insights on their working. It encourages readers to gain a nuanced understanding of the working of law, legal systems and legal cultures, adding to existing deliberations on the constituents of an ideal system of law.

Mahendra Pal Singh is Professor Emeritus, University of Delhi and currently Chair Professor at Centre for Comparative Law, National Law University (NLU) Delhi. He has also served as the Chancellor of the Central University of Haryana, Chairperson of Delhi Judicial Academy, and Vice Chancellor of the National University of Juridical Sciences (NUJS), Kolkata. He was a fellow and visiting professor at several institutions and universities abroad and in India. His publications include numerous articles in national and international legal journals and several books. He is the founding editor of the NUJS Law Review and The Indian Yearbook of Comparative Law and has collaborated on national and international research projects in the area of comparative public law. He is currently directing a project on “Exploring the Nature of the Indian Legal System".
Niraj Kumar is currently working as an assistant professor at National Law University Delhi, where he is also the Project Co-director of “Exploring the Nature of the Indian Legal System” at the Centre for Comparative Law. He taught at the Faculty of Law, University of Delhi previously. He was an Expert member of drafting Committee of the EPF Act and the Central Water Commission for approval of projects. He has published several articles in journals and has presented papers on environmental law, constitutional law and comparative public law. His most recent publication is a book chapter in Biodiversity, Law, Policy and Governance, Edited by Tandon et al published by Routledge in 2017. His areas of interest are Administrative Law, Constitutional Law, Environmental Law, Interpretation of Statutes, Jurisprudence and Comparative Law.