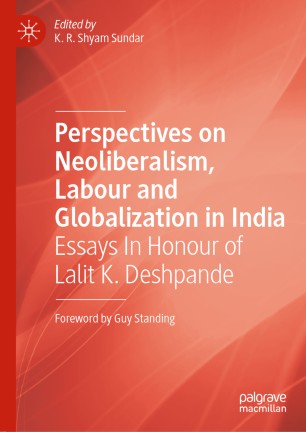 Perspectives on Neoliberalism, Labour and Globalization in India

This book employs a variety of perspectives such as Institutional, Social Democratic, Marxist, Gender and Informal, Biblical and Dalit, to critically examine the impact of neo-liberal globalisation on both formal and informal sectors of the labour market and the industrial relations system. The narratives not only interrogate current institutions and paradigms, but also outline future developments.

K. R. Shyam Sundar, Professor, XLRI, Xavier School of Management, Jamshedpur, India. Dr Shyam Sundar has published over sixty research articles in prominent journals, thirteen books (including three as an editor), and more than forty articles on Industrial Relations and Labour Economics.  He has conducted several projects for the ILO, European Union, etc. and serves on the Editorial Board of the Indian Journal of Labour Economics and Amity Journal of Economics.
Contributors:

“The book collects an excellent set of papers, written by experienced scholars in the field, on different aspects of the change triggered by the ascendancy of neoliberalism. The strength of the book particularly lies in its inclusion of the variety of perspectives ranging from Biblical to Marxian and Dalit perspectives, all challenging the neoliberal onslaught on labour and attempting to provide alternatives to neoliberalism. The book is a fitting tribute to Professor Lalit K Deshpande, one of the finest scholars of the Indian labour market.” (Achin Chakraborty, Professor of Economics, Director, Institute of Development Studies, Kolkata, India)

“Professor L.K. Deshpande has been one of the doyens of the labour studies in India who contributed immensely to the implications of globalization for labour markets. This volume edited by Dr. K.R. Shyam Sundar has contributions from some well-known scholars, both from India and abroad, on various aspects relating to the political economy of labour and industrial and labour relations in the wake of globalization. These articles cover a wide range of issues and will certainly make a good contribution to the study of political economy of labour. It is a befitting tribute to Professor L.K. Deshpande for which Dr. K.R. Shyam Sundar deserves appreciation.” (Alakh N. Sharma, Director, Institute for Human Development, Delhi, India; Editor, India Journal of Labour Economics)

“The plow of globalization has dredged up the fault lines of inequity in our world that had been hitherto complacent in believing that it was on the path of creating prosperity for all. In this context, the study of industrial relations, work, employment and labour has acquired a new urgency. What is needed is a theory (or theories) at the high level of international interactions among all the stakeholders of the globally integrating economy that could guide policy for governments, employers, labour, buyers, consumers, suppliers, etc., in national as well as in cross-national production chains. This book takes up the challenge of building industrial relations theories at the macro-level.   Theorizing industrial relations systems is expanded in scope by including workers hitherto excluded from formal analysis (e.g., dalits), and the theological precepts.  This book is a great resource for researchers, policymakers, teachers and students.” (Anil Verma, Professor of Human Resource Management at Rotman, University of Toronto)

“This book honouring Professor Lalit Deshpande as one of India’s first labour economists provides a timely review of trends and patterns in labour, employment and productivity in India over the last two decades.  In their sweep and depth, the essays are an apt tribute to a scholar whose range of interests has been vast and deep, someone who demonstrated the ability to focus on the detail while not losing sight of the big picture.  A gentle, genial and warm person, one cannot think of Lalit Deshpande without his companion and co-author Sudha, an equally dedicated scholar. I see these two volumes as an homage to their long-standing partnership and dedication to the cause of workers and their labour.” (Ashwini Deshpande, Professor, Delhi School of Economics, University of Delhi, India)

“L.K. Deshpande has made a wide variety of contributions to labour studies in India over many decades. He greatly added to our understanding of the informal sector in an early study in Bombay, following this up later with research into labour market flexibility, in both cases carrying out and using innovative surveys. He has always believed that labour markets could not be understood without an understanding of the institutions on which they were based, and was highly critical of simplistic neo-classical models. So it is entirely fitting that Shyam Sundar has put together a collection of articles in his honour in this book.  The articles in this book carry on his critical perspectives in the analysis of diverse aspects of labour markets and industrial relations.  This is a book that anyone interested in labour studies in India will want to have on their shelves.” (Gerry Rodgers, Former Director, International Institute for Labour Studies, Geneva)

“A wide-ranging volume pulling together great contributions from eminent writers. Its discussions of neoliberal globalisation and dominant neoliberal perspectives are packed with refreshing ideas and new angles. Crucially, the detailed analyses of Indian neoliberalism take seriously gendered unpaid work as well as the fracturing of labour along lines of caste and tribe. Importantly, the conversations point to lots of different ways forward against neo-liberalism, and for labour in its various shapes and sizes.” (Jens Lerche, Department of Development Studies, School of Oriental and African Studies (SOAS), University of London)

“This edited collection provides valuable and incisive analysis of the transformations wrought by globalization and neoliberalism on labour and, importantly, offers fresh insights on how labour market institutions, industrial relations practices and labour and social movements could respond to these conditions to fashion a more sustainable and equitable future. A real strength of the collection is the quality of the authors that it brings together but also the diversity of perspectives that it draws together. It includes contributions that approach the overarching theme of the book from different standpoints and areas of scholarship: critical development studies; Marxism; social democracy; gender analysis; caste; religious ethics, etc. The breadth of these contributions also mean that it will engage researchers internationally working on the political economy of globalisation; international and comparative employment relations and the socially contested character of contemporary labour regulation.” (Michael Gillan, Senior Lecturer, UWA Business School, The University of Western Australia)

“A committed teacher, a mentor to generations of students, and a highly distinguished economist working on labour issues, Lalit Deshpande has been a stalwart within the tradition of economics.  The common theme that runs through the Festschrift is the deleterious consequence of the neo-liberal order for the working people, though, given their diverse backgrounds, there is less agreement on the alternative to it. For the range of issues it covers, for the depth at which the authors interrogate the neo-liberal order, and for the intensity of purpose with which the authors explore alternatives to this order, this is a remarkable volume, worthy of the person being honoured. ” (Prabhat Patnaik, Professor (Retired), Centre for Economic Studies and Planning, Jawaharlal Nehru University, India)

“This collection of essays to honour the distinguished labour economist Lalit Deshpande takes a heterodox approach to labour issues in India. In contrast with the conventional and narrow approach that takes labour as just another commodity and ignores that the labour market is really a socio-political institution, it considers various alternative ways of analysing the labour market issues, including Marxist, ILO-institutional and even ethical-religious approaches. The reader will get a stimulating account of the salient issues that Indian labour faces in today's highly globalised context.” (Pranab Bardhan, Professor of Graduate School, Department of Economics, University of California, Berkeley)

“This is a must-read book on labour and development in the post-Washington Consensus era. Comprised of papers from leading international scholars of employment relations, the volume combines fine-grained analysis of the Indian experience with comparative studies of change in western countries. It also offers theoretical interventions from a range of perspectives: Marxian, Polanyian, feminist, Dalit, and even religious.  Scholars and students of employment relations, human resource management, political economy and development will find cutting-edge papers that address relations between global institutions, employment relations systems, labour law reform, etc. This book also offers insights in the best tradition of L.K. Deshpande, whose monumental studies of labour market segmentation helped to inform generations of labour researchers in India. Like Professor Deshpande’s work, the book is strongly informed by the Indian experience while simultaneously international in the scope of the lessons it offers for researchers around the world.” (Tom Barnes, Economic Sociologist, Institute for Religion, Politics & Society, Australian Catholic University)