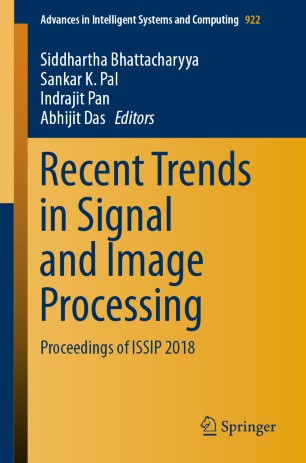 Part of the Advances in Intelligent Systems and Computing book series (AISC, volume 922)

Siddhartha Bhattacharyya [LFOSI, FIETE, FIEI, SMIEEE, SMIETI, SMACM, LMCRSI, LMCSI, LMISTE, LMIUPRAI, LMCEGR, MIET (UK), MIRSS, MIAENG, MCSTA, MIAASSE, MIDES, MISSIP, MSDIWC] received his Bachelors in Physics & Optics and Optoelectronics and Masters in Optics and Optoelectronics from the University of Calcutta, India in 1995, 1998 and 2000 respectively, and completed his Ph.D. in Computer Science and Engineering from Jadavpur University, India in 2008. He is currently a Senior Research Scientist at VSB Technical University of Ostrava, Czech Republic, and is also the Principal of the RCC Institute of Information Technology, Kolkata, India. He is co-author of 4 and co-editor of 20 books, and has published over 200 research papers in international journals and conference proceedings. His research interests include soft computing, pattern recognition, multimedia data processing, hybrid intelligence and quantum computing.

Sankar K. Pal, a Distinguished Scientist and former Director of Indian Statistical Institute, is currently an INSA Distinguished Professor Chair. He is an alumnus of Calcutta University; the Indian Statistical Institute; and Imperial College, London. He has worked at NASA Johnson Space Center, Houston; the University of California, Berkeley; University of Maryland, College Park; and US-Naval Research Lab, Washington DC. He is an IEEE-CS Distinguished Visitor for the Asia-Pacific region, and has visited 45 countries as a keynote/invited speaker or an academic visitor. He is a fellow of TWAS (The World Academy of Sciences), IEEE, IAPR, IFSA, IRSS, and all four Indian science/engineering academies; He has received various honors, including the highly coveted S.S. Bhatnagar Prize (science award) and Padma Shri (civilian award) in India, and the Khwarizmi International Award in Iran. He is co-author of 20 books, and over 400 publications on pattern recognition, machine intelligence, soft computing, granular mining and big data. He has served on the editorial boards of more than 20 international journals, including IEEE Transactions.

Indrajit Pan completed his B.E. in CSE with Honors at The University of Burdwan in 2005, M.Tech. in IT at Bengal Engineering and Science University, Shibpur in 2009, and his Ph.D. (Engineering) from IIEST, Shibpur in 2015. His research interests include social network analysis and cloud computing. Indrajit is now an Associate Professor at the Information Technology Department at RCC Institute of Information Technology, Kolkata. He has published about thirty research papers internationally, as well as a number of edited volumes. Indrajit is a senior member of IEEE, USA and a member of ACM, USA and CSI.

Abhijit Das received his B.Tech. in IT from the University of Kalyani in 2003, M.Tech. in IT from the University of Calcutta in 2005 and Ph.D. (Engineering) from the Department of CSE, Jadavpur University in 2016. He has over 15 years of teaching and research experience and has published more than more 30 high-quality papers internationally. He is currently an Associate Professor at the Department of IT, RCC Institute of Information Technology, Kolkata, India, and is guiding 4 research scholars.