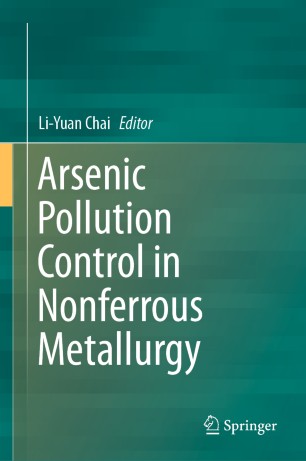 The control of arsenic pollution has attracted worldwide attention, as it is one of the top 20 hazardous substances, and greatly threatens the human health, ecological balance, and industrial development. Arsenic pollution results from natural enrichment and anthropological activities, especially mining and smelting operations.

Liyuan Chai is Dean of the School of Metallurgy and Environment, Central South University(CSU) in China, which has a strong tradition in non-ferrous metal mining, dressing and metallurgy. He is also Director of the Chinese National Engineering Research Center for Control & Treatment of Heavy Metal Pollution and of the National Environmental Protection Engineering Center for Pollution Control of the Nonferrous Metal Industry.

His research focuses on reducing heavy-metal emissions and resource recycling. He has received an award from the National Science Fund for Distinguished Young Scholars and is a Ministry of Education of Yangtze River Scholar Professor. In addition, he was awarded the second prize for National Technology Innovation and second prize for National Technology Progress.Since 2009 he has been the Chinese Chairman of the International Organizing Committee for the East Asia Resources Recycling Technology Conference.

In recent years, he has been responsible for more than 50 major national research projects, including the National Water Special Sub-project, a Major Project of the National Science and Technology Support Program, and National Major Project 863. Many of his technological achievements are now widely applied in non-ferrous metallurgical industries and have contributed to heavy-metal emission reduction and recycling. He holds 93 patents and has published over 250 papers in journals such as Environmental Science & Technology, Water Research, Nano Energy, ACS Applied Material Interfaces, and the Journal of Hazardous Material.