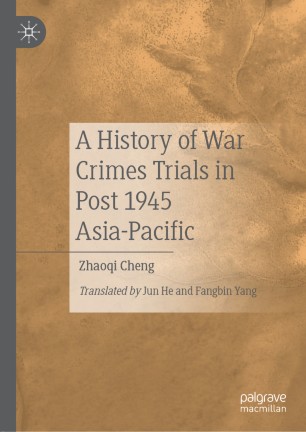 A History of War Crimes Trials in Post 1945 Asia-Pacific

Written by the Director of the Tokyo Trial Research Centre at China's Shanghai Jiao Tong University, this book provides a unique analysis of war crime trials in Asia-Pacific after World War II. It offers a comprehensive review of key events during this period, covering preparations for the Trial, examining the role of the War Crimes Commission of the United Nations as well as offering a new analysis of the trial itself. Addressing the question of conventional war crimes, crimes against humanity, crimes against peace (such as the Pearl Harbor Incident) and violations of warfare law, it follows up with a discussion of post-trial events and the fate of war criminals on trial. Additionally, it examines other Japanese war crime trials which happened in Asia, as well as considering the legacy of the Tokyo trial itself, and the foundation of a new Post-War International Order in East Asia.

He Jun is a Lecturer at the East China University of Science and Technology, China. She obtained her M.A. in bilingual translation at the University of Westminster, London in 2002. Between 2002 and 2004, He Jun was the executive chief editor of BizShanghai. She is a member of Shanghai Foreign Literature Association, and has translated more than 16 books, covering many fields such as culture, literature, and history.

Yang Fangbin has a Masters of Translation and Interpreting from East China University of Political Science and Law, China, and has participated in many translation projects such as the Guidebook of UK China Judicial Roundtable and other legal translations.