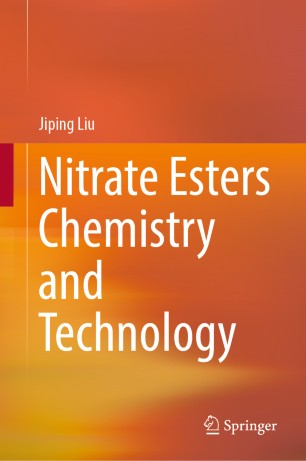 The idea of this book is to present the up-to-date research results on Nitrate Esters as explosive materials. It covers many aspects including the material structures, nitrating agent, chemical synthesis devices, preparation technology, and applications etc. In particular, this work sheds light on the comprehensive utilization and thorough destruction of the used Nitrate Easters which is crucial for preventing repeated pollution. This is a highly informative and instructive book providing insight for the researchers working on nitrating theory, energetic materials and chemical equipments.

Jiping Liu is a full-time professor in the School of Materials Science and Engineering, Beijing Institute of Technology, China. He mainly engages in preparation engineering of energetic materials and design of charge structure. He successfully developed the first light temporarily blinded bomb and heavy incendiary in the world, prepared 1, 3-diazido-propane and diazido neopentyl glycol dinitrate, and studied the formula, properties, and detonation characteristics of mononitrate, dinitrate, and mutiplenitrate esters and mixed liquid explosives. Meanwhile, he has finished several national research projects and had two books published about energetic materials. The honors he has earned for his research on energetic materials are listed as follows:
In 1979, was selected in Who’s Who in The World of the United States because of developing propellants by extracting cellulose from Juncus effuses as the propellants’ fourth substitute in the world;
During 1980 and 1983, won the Kunming Military Significant Scientific Achievement Award because of preparation of isooctanehexol hexnitrate;
In 1991, earned the second prize of National Award for Technological Invention for reusing the retired propellants which brought about nearly $ 2 billion in economic benefits;
In 1992, won Special Government Allowances of the State Council and was honored as the national young scientist;
In 1995, got the army research prize of the eighth five-year plan;
In1996, was named the ministry of education cross-century talents;
In 2001, got the army research prize of the ninth five-year plan
In 2003, earned the second prize of National Award for Technological Invention for my research on light temporarily blinded bombs to be the first person who had won this prize twice;
In 2005, won the progress prize in science and technology of Ho Leung Ho Lee;
In 2009, earned the second prize of Beijing technological innovation;
In 2010, was awarded "Scientific Chinese" person of the year;
During 2011and 2012，was awarded the grand and the first prize of technological progress by General Chamber of Commerce.