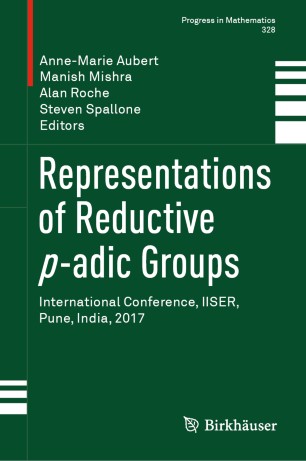 Part of the Progress in Mathematics book series (PM, volume 328)

This book consists of survey articles and original research papers in the representation theory of reductive p-adic groups. In particular, it includes a survey by Anne-Marie Aubert on the enormously influential local Langlands conjectures. The survey gives a precise and accessible formulation of many aspects of the conjectures, highlighting recent refinements, due to the author and her collaborators, and their current status. It also features an extensive account by Colin Bushnell of his work with Henniart on the fine structure of the local Langlands correspondence for general linear groups, beginning with a clear overview of Bushnell–Kutzko’s construction of cuspidal types for such groups. The remaining papers touch on a range of topics in this active area of modern mathematics: group actions on root data, explicit character formulas, classification of discrete series representations, unicity of types, local converse theorems, completions of Hecke algebras, p-adic symmetric spaces. All meet a high level of exposition. The book should be a valuable resource to graduate students and experienced researchers alike.

ANNE-MARIE AUBERT is Research Director in Mathematics at the Centre National de la Recherche Scientifique (CNRS) at the Institut Mathématiques de Jussieu Paris Rive-Gauche, Paris, France. She is a member of the Comité National de la Recherche Scientifique, and has served on the editorial board of the Bulletin and the Memoirs of the French Mathematical Society.

ALAN ROCHE is Associate Professor of Mathematics at the University of Oklahoma, USA. He previously held visiting positions at Purdue University and Oklahoma State University, USA.

STEVEN SPALLONE is Associate Professor of Mathematics at the Indian Institute of Science Education and Research (IISER), Pune, India. He graduated from the University of Pennsylvania and completed his PhD at the University of Chicago, USA, in 1998 and 2004, respectively. His research interests include number theory and representation theory.