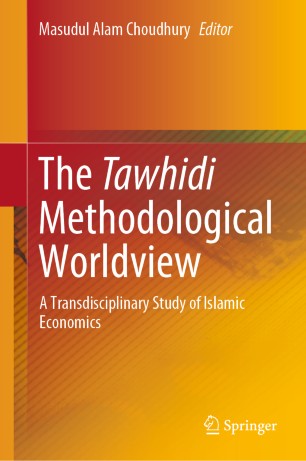 A Transdisciplinary Study of Islamic Economics

This book develops and applies the methodology of Tawhid (“monotheism as law”) and the Sunnah (the teachings of Prophet Muhammad) in the Qur’an in establishing a transdisciplinary foundation for the study of Islamic economics, finance, society, and science. It employs the Tawhidi String Relation (TSR), a new theoretical framework in contemporary Islamic sciences, in the methodological formalisation and application of the Tawhidi worldview - as the primal ontological law of monotheism. It employs a deeply Qur’anic exegesis, and a mathematical, philosophical, and socio-scientific mode of inquiry in deriving, developing, and empirically applying the Qur’anic methodology of the “unity of knowledge”. It is the first book of its kind in rigorously studying the true foundation of the Qur’anic concept of ‘everything’ - as the world-system extending between the heavens and Earth. The qur’anic terminology of the precept of this “world-system” in its most comprehensive perspective is A’lameen, the principle in the Qur’an that accounts for the inter-causal relations between systemic entities, variables, and functions. This cardinal principle conveys the corporeal meaning of monotheism in its cognitive implication of abstraction and application. Such a study has not been undertaken in existing Islamic socio-scientific literature in analysing Islamic economics, finance, science, and society collectively, using Tawhidi as a theoretical framework. This book will be relevant to religious and economics scholars interested in studying divine law and Islamic principles, particularly Tawhidi, Sharia and related philosophical schools of thought.