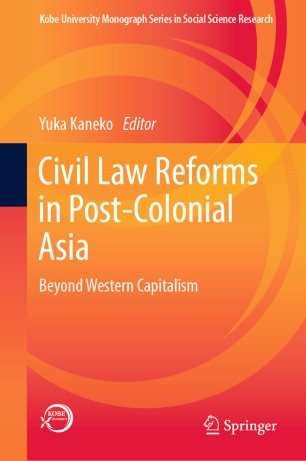 This book focuses on the legal systems of the late-developing countries of ASEAN (Cambodia, Laos, Myanmar, and Vietnam, often referred to as the CLMV countries). These nations are apt to be placed in an economically disadvantageous situation within the opportunity of communalization of legal systems being advanced by the ASEAN Economic Community (AEC) launched in 2015, and the book clarifies the dynamics of the changes within these legal systems. Concurrently, there is an intention to analyze the “legal system development support” that has continued to be provided to these countries since the mid-1990s via international development support from international organizations and developed countries including Japan. In particular, the emphasis has been on the area of civil law, where the main subject of Japan’s support has been centered on the civil code and civil procedure code.

The legal system of the recipient country is complicated by the crisscrossing of the remnants of previous eras, from the inherent laws that have existed since before colonization, the laws of the colonial powers that were introduced during the colonial era (French law in Cambodia, Laos, and Vietnam; English law in Myanmar), the influence of socialist law after independence from colonization, and the path of modern industrialization and development, such that one country's legal system is the combination of all of these influences.

For the reader to understand the dynamics of these changing laws, each chapter of the book combines two methodological perspectives. The first is to ascertain the spatial range as to how far the civil law extends across social phenomena. The second is a historical perspective in which the trends in legal changes will be understood on a time axis.