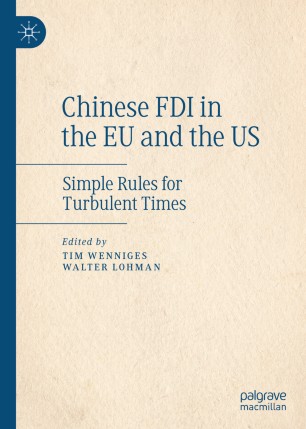 Chinese FDI in the EU and the US

This book examines the evolving economic relationship between China and the West, in particular investment regimes and climates.  How do their economic models differ, how do they interact, and what does it mean for growth and economic freedom? In recent years, the amount of Chinese FDI in Europe and the US has soared. Although European and American FDI in China is still significantly higher, the discussion about fair regulations for investors in both countries is subject of expanding debate. All this takes place in the middle of the negotiation of a new investment treaty with the European Union and prospects of a trade war between the US and China. This book gives Academics, Practitioners and Politicians “simple rules” for navigating these challenges with an eye to maximizing value and minimizing risk.
Tim Wenniges is the Managing Director for International Affairs at SUEDWESTMETALL, the Baden-Wuerttemberg Employers’ Association of the Metal and Electrical Industry. Before he was country director of the Konrad Adenauer Foundation in China. In both positions he works to build and explore bilateral Sino-German ties. With his work and high-level study of the Chinese economy and new possibilities for the Sino-German relationship, his work is of critical value in the development of the contours of Sino-European trade in the decades to come. He is a public speaker and bridgebuilder between Germany and China. He studied and worked for the last 20 years at the interface of industry and politics in several parts of Europe, the US, Indonesia and China.
Walter Lohman has been Director of the Asian Studies Center at the Heritage Foundation in Washington, DC, for the last 12 years, and an adjunct professor at Georgetown University for six. Prior to this, he was Executive Director of the US-ASEAN Business Council and spent seven years working on Capitol Hill, for Senator John McCain and the Senate Foreign Relations Committee.