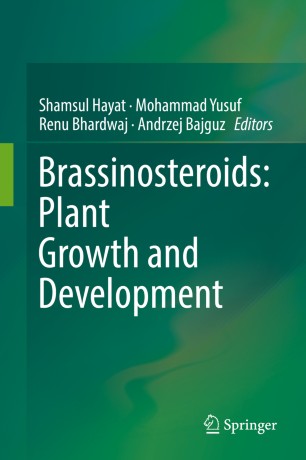 The entire range of the developmental process in plants is regulated by a shift in the hormonal concentration, tissue sensitivity and their interaction with the factors operating around the plants. Phytohormones play a crucial role in regulating the direction of plant in a coordinated fashion in association with metabolism that provides energy and the building blocks to generate the form that we recognize as a plant. Out of the recognized hormones, attention has largely been focused on Auxins, Gibberellins, Cytokinins, Abscisic acid, Ethylene and more recently on Brassinosteroids. In this book we are providing the information about a brassinosteroids that again confirm its status as phytohormones because it has significant impact on various aspects of the plant life and its ubiquitous distribution throughout the plant kingdom. Brassinosteroids are generating a significant impact on plant growth and development, photosynthesis, transpiration, ion uptake and transport, induces specific changes in leaf anatomy and chloroplast structure.This book is not an encyclopedia of reviews but includes a selected collection of newly written, integrated, illustrated reviews describing our knowledge of brassinosteroids. The aim of this book is to tell all about brassinosteroids, by the present time. The various chapters incorporate both theoretical and practical aspects and may serve as baseline information for future researches through which significant development is possible. It is intended that this book will be useful to the students, teachers and researchers, both in universities and research institutes, especially in relation to biological and agricultural sciences.

Dr. Shamsul Hayat is Professor, in the Department of Botany, Aligarh Muslim University, Aligarh, India. He received his Ph.D. degree in Botany from Aligarh Muslim University, Aligarh, India. He has also worked as Associate Professor in King Saud University, Riyadh, Saudi Arabia and as a BOYSCAST Fellow at National Institute of Agrobiological Sciences, Tsukuba, Japan. His major areas of research are Plant hormone, nanoscience and abiotic stress in plants. It has been reported from his group that phytohormone such as brassinosteroids, salicylic acid and nitric oxide play an important role in increasing the photosynthetic efficiency of the plant and regulate the antioxidant system even under abiotic stress. He is also studying the protein profiling in hormone treated plants under abiotic stress.Dr. Hayat has been awarded Prof. Hira Lal Chakravorty Award by Indian Science Congress Association, Kolkata, India, Associate of National Academy of Agricultural Sciences, New Delhi, India, BOYSCAST fellow by Department of Science & Technology, Government of India, New Delhi and young scientist by Association of the Advancement of Science, Aligarh, India. He has been the Principal Investigator of the various projects sanctioned by different agencies and guided number of students for the award of Ph.D. and M.Phil degree. Dr. Hayat has published one hundred thirty research papers in leading journal of the world such as Nitric Oxide, Environmental & Experimental Botany, Plant Physiology & Biochemistry, Environmental Pollution, Plant Signalling & Behaviour, Photosynthetica, Acta Physiologiae Plantarum with high impact factor and also published ten books by Kluwer Academic, Springer, Wiley-VCH, Science Publisher and Narosa Publishing House. Dr. Hayat has presented his work at several national and international conferences in Japan, Brazil, Spain, China and Saudia Arabia. He is a regular reviewer and on the panel of editorial boards of National and International journals, Dr. Hayat is also member of important National and International scientific societies.

Dr. Mohammad Yusuf is an Instructor (Lecturer) in the Department of Biology, United Arab Emirates University, Al Ain, UAE. Mohammad received his Ph.D. in Plant Physiology and M.Sc. in Botany (Plant Physiology) from Aligarh Muslim University, India. He has worked as the SERB-Young Scientist and also an awardee of prestigious Dr. D.S. Kothari Postdoctoral fellowship from the Government of India. He has been invited to present his work at Huazhong agricultural university (HAU), Wuhan, China. Mohammad research contribution includes more than 35 research article in the international journal of repute and also more than 1000 google scholar citations with 15 h-index. He is exploring phytohormone mediated abiotic stress tolerance mechanism in crop plants through proline metabolism.

Prof. Renu Bhardwaj is serving Guru Nanak Dev University for more than 27 years in the research area of Plant Growth Regulations and Stress Physiology and has published more than 250 research papers in the journals of National and International repute She has been on various administrative positions like Director IQAC and Professor Incharge Examinations. She has been  awarded INSA Visiting Fellowship, CSIR Visiting Associateship , FNESA Award  and FLS, London .  She completed 15 major research projects and guided more than 30 Ph.D students. She has also organized more than 20 National / International conferences. She has collaborated research both at National and International level.

Dr. Andrzej Bajguz was born in 1970 in Bialystok, Poland. In 1994 he obtained the MSc degree in Biology at Warsaw University, Branch in Bialystok, his PhD in 1998 at the Nicholas Copernicus University in Torun, habilitation in biological sciences in 2012. He works at the University of Bialystok. He is author or co-author of 85 original, chapters and review papers, and 6 books. He is a member of the Polish Biochemical Society, the Polish Society of Experimental Plant Biology and the Federation of European Societies of Plant Biology. Fields of his scientific interest are brassinosteroids and ecdysteroids – their physiology and biochemistry in lower plants. Within the last twenty years the dominant area of his scientific experiments was hormonal growth and development regulation of the algae, mainly through brassinosteroids, which are a group of plant hormones. Research has shown that in Chlorella vulgaris algae biosynthesis of brassinosteroid is concurrent to the so called late and early C-6 oxidation pathway. It was also shown that endogenous brassinosteroids are necessary for the normal growth and development of algae growing in light. It was found that in Chlorella vulgaris 7-oxalactone type are more active than 6-ketone type of brassinosteroids.