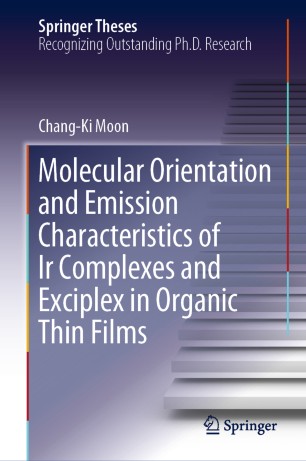 It has long been known that molecular orientation influences the electrical and optical properties of molecular films. One notable example is in liquid crystals where rigid rod or disk shaped molecules are commonly used. Understanding the origin of the molecular orientation and its control by surface treatment and electric field resulted in the development of liquid crystal displays. The same thing has happened in organic electronics, and considerable effort has been devoted to understanding and controlling molecular orientation in solid films to improve charge carrier mobility and light absorption, ultimately to improve the performance of organic solar cells and thin film transistors.

In contrast, less attention has been paid to molecular orientation and its influence on the characteristics of OLEDs, probably because of the use of amorphous films rather than micro-crystalline films, and it is only in recent years that some molecular films are known to have preferred orientation.  This thesis addresses this topic, focusing on OLEDs, describing the origin and control of the orientation of phosphorescent Ir complexes possessing spherical shape rather than rod or disk shape, the simulation of the optical characteristics of OLEDs influenced by preferred molecular orientation, and finally the orientation of intermolecular charge transfer excitons and its correlation to electronic structures in thin films.

Dr. Chang-Ki Moon received the "Best PhD Theses Award in 2017" in the Materials Science and Engineering department at SNU in December 2017, and the “Best Paper Award” of Schrodinger’s 2017 Excellence in Materials Science Applications Publication Contest in Schrodinger Inc. in February 15, 2018.