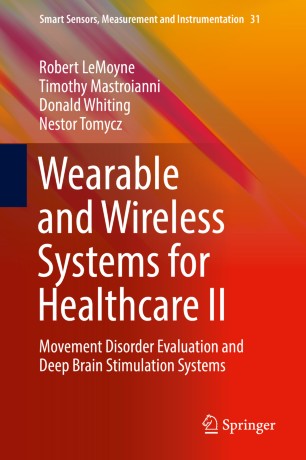 This book provides a far-sighted perspective on the role of wearable and wireless systems for movement disorder evaluation, such as Parkinson’s disease and Essential tremor. These observations are brought together in the application of quantified feedback for deep brain stimulation systems using the wireless accelerometer and gyroscope of a smartphone to determine tuning efficacy. The perspective of the book ranges from the pioneering application of these devices, such as the smartphone, for quantifying Parkinson’s disease and Essential tremor characteristics, to the current state of the art. Dr. LeMoyne has published multiple first-of-their-kind applications using smartphones to quantify movement disorder, with associated extrapolation to portable media devices.

Dr. Robert LeMoyne is currently serving as an Adjunct Professor for Northern Arizona University for the Department of Biological Sciences and Center for Bioengineering Innovation. At Northern Arizona University he is researching advanced technology concepts for wearable and wireless systems for biomedical applications. He earned his PhD in Biomedical Engineering from University of California Los Angeles (UCLA) during 2010. From 2010 to 2012 he served Sandia National Laboratories, and since 2013 he has been serving Northern Arizona University. Dr. LeMoyne has first authored over 100 technical proceedings that have been cited over 1000 times. From a biomedical engineering perspective his research interests emphasize deep brain stimulation systems, prosthetic technologies, machine learning applications, and wearable and wireless systems for biomedical applications, such as through smartphones and portable media devices, for accessing health status, such as Parkinson’s disease and Essential tremor.

Timothy Mastroianni is a Cognitive Scientist, Researcher, Entrepreneur. First to develop and use computer vision and pattern recognition in a non-invasive manner to discover the internal states of the random number generator in machines (HiLoClient). Later presented these algorithms and methods to Carnegie Mellon University to map the human brain using machine learning and fMRI to discover brain states during specific tasks.

Donald Mark Whiting was raised in Altoona, Pennsylvania and began his undergraduate education at Grinnell College in Iowa in 1976. He received an MS in Physiology at Georgetown University in 1981 and was awarded his medical degree in 1985 after training at Thomas Jefferson Medical College in Philadelphia. Donald then completed his neurosurgical residency at The Cleveland Clinic and a Neurotrauma fellowship at Allegheny General Hospital.

In 1992, Donald Whiting joined a practice in Washington, PA that would later merge with the health system now known as Allegheny Health Network. He became the System Chair for their Neuroscience Institute and a Professor of Neurosurgery for Drexel University in 2014. Three years later, he also accepted the role of President of Allegheny Clinic. Amongst his peers, Donald Whiting is a respected physician-leader that is passionate about changing the way health care is delivered.

Donald has authored over 60 scientific articles and chapters in medical textbooks and various publications such as The Journal of Neurosurgery & Current Concepts in Movement Disorder Management. He is an active member in many of his field’s leading professional and scientific organizations, including the Congress of Neurological Surgeons, the American Association of Neurological Surgeons, and the American Society of Stereotactic and Functional Neurosurgery.

It’s no wonder Donald Whiting has been the annual recipient of “Top Doctor/Surgeon” awards on both local & national levels. He is regarded as one of the nation’s foremost experts in the use of deep-brain stimulation to control the debilitating motor symptoms of patients with Parkinson’s disease and other movement disorders, helping establish Allegheny General Hospital in Pittsburgh, Pennsylvania as one of the top centers in the world for DBS treatment. His sub-specialties include complex spine surgery, disc replacement/motion preservation spine surgery, the surgical treatment of movement disorders & Neurosurgical management of pain.

In his spare time, he enjoys spending time with his family, making pizza & wine.