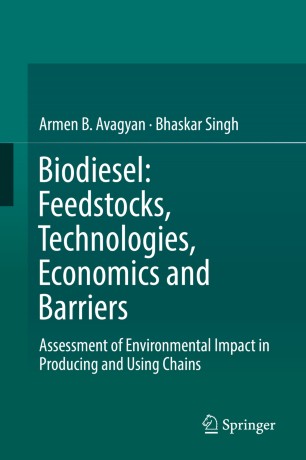 Assessment of Environmental Impact in Producing and Using Chains

Air pollution policy is closely connected with climate change, public health, energy, transport, trade, and agriculture, and generally speaking, the Earth has been pushed to the brink and the damage is becoming increasingly obvious. The transport sector remains a foremost source of air pollutants – a fact that has stimulated the production of biofuels. This book focuses on the biodiesel industry, and proposes a modification of the entire manufacturing chain that would pave the way for further improvements.

Oil derived from oilseed plantations/crops is the most commonly used feedstock for the production of biodiesel. At the same time, the UK’s Royal Academy of Engineering and 178 scientists in the Netherlands have determined that some biofuels, such as diesel produced from food crops, have led to more emissions than those produced by fossil fuels. Accordingly, this book re-evaluates the full cycle of biodiesel production in order to help find optimal solutions. It confirms that the production and use of fertilizers for the cultivation of crop feedstocks generate considerably more GHG emissions compared to the mitigation achieved by using biodiesel. To address this fertilization challenge, projecting future biofuel development requires a scenario in which producers shift to an organic agriculture approach that includes the use of microalgae.

Among advanced biofuels, algae’s advantages as a feedstock include the highest conversion of solar energy, and the ability to absorb CO2 and pollutants; as such, it is the better choice for future fuels. With regard to the question of why algae’s benefits have not been capitalized on for biofuel production, our analyses indicate that the sole main barrier to realizing algae’s biofuel potential is ineffective international and governmental policies, which create difficulties in reconciling the goals of economic development and environmental protection.

Dr. Armen B. Avagyan graduated with degrees from the Biological Department of Yerevan State University and Economics Department of Armenian State University, before pursuing postgraduate studies at Moscow State University. He subsequently worked as a Senior Researcher at the Agriculture Institute and Technological Institute of Amino Acids, Director of Yerevan Vitamin Plant, Institute of Biotechnology, and Deputy Director of Nairit chloroprene rubber plant. He founded the Research & Industry Center of Photosynthesizing Organisms, Feed Additives and Physiologically Active Compounds, and was an advising expert to EU Horizon 2020. He is a member of the American Chemical Society, Society of Chemical Industry (USA), and serves on the Editorial Boards of several international journals.

He has published more than 100 works, including the following monographs: Theory of Global Sustainable Development based on including of microalgae in Bio and Industrial Cycles. New Design and Building of Biological System and Algae to Energy and Sustainable Development. Technologies, Resources, Economics and System Analyses. New Design of Global Environmental Policy and Live Conserve Industry.

Dr. Bhaskar Singh graduated from Ranchi University (B.Sc., Environment & Water Management), completed his M.Sc. in Environmental Sciences at Jiwaji University, and received his M.Phil. (Environmental Sc. & Engg.) from Pondicherry University, India with a Gold Medal awarded in 2006. He obtained his Ph.D. from the prestigious Indian Institute of Technology (BHU), Varanasi, UP, India in 2010, prior to conducting postdoctoral research at Durban University of Technology, South Africa. He is currently serving as an Assistant Professor at the Department of Environmental Sciences, Central University of Jharkhand, Ranchi, India. He also serves as a reviewer for several international journals from Elsevier, Springer, and ACS. He is a recipient of the prestigious CSIR Senior Research fellowship and CSIR Research Associateship.

Dr. Singh’s current research interest lies in the synthesis of biodiesel from plant and used cooking oil, and in the development of novel heterogeneous catalysts. He has co-edited two books with Springer: ‘Algae & Environmental Sustainability’ and ‘Phytoremediation Potential of Bioenergy Plants’. His publications include 40 research and review papers in peer-reviewed and high-impact international journals, as well as 15 book chapters.