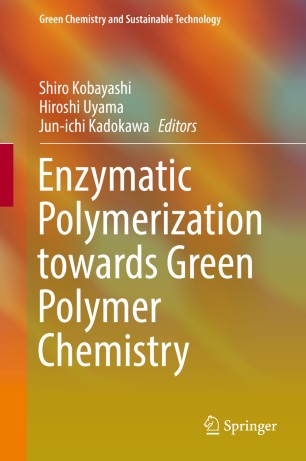 This book comprehensively covers researches on enzymatic polymerization and related enzymatic approaches to produce well-defined polymers, which is valuable and promising for conducting green polymer chemistry. It consists of twelve chapters, including the following topics:
This book is not only educative to young polymer chemists like graduate students but also suggestive to industrial researchers, showing the importance of the future direction of polymer synthesis for maintaining a sustainable society.

Shiro Kobayashi studied organic chemistry and polymer chemistry in Kyoto University, where he obtained BS, MS, and PhD. He worked as a postdoc with Prof. G. A. Olah at Case Western Reserve University for two years. In 1972, he joined Kyoto University as a research associate to start studying polymer synthesis. He stayed as a Humboldt fellow with Prof. H. Ringsdorf at University of Mainz in 1976. Then, he was appointed as a full professor at Tohoku University in 1986, starting research on enzymatic polymerization. In 1997, he moved to Kyoto University and officially retired in 2005, to become Emeritus Professor. Since then, he has been a distinguished professor at Kyoto Institute of Technology until 2017. His research interests include polymer synthesis and functional polymeric materials. In particular, he developed enzymatic polymerization, which enabled the first chemical synthesis of several polysaccharides like cellulose, xylan, chitin, hyaluronic acid, and chondroitin, various functional polyesters, and new aromatics polymers. The method provides much contribution to green polymer chemistry. To date, he has published 195 original research papers on enzymatic polymerization. He received various awards among others: the Award of the Chemical Society of Japan for Young Chemists (1976), the Award of the Society of Polymer Science, Japan (1986), Humboldt Research Award, Germany (1999), the Award of the Chemical Society of Japan (2001), the Hattori Hokokai Foundation Award (2001), the 30th John Stauffer Distinguished Lecture Award in the Sciences, University of Southern California (2002), Medal with Purple Ribbon (2007, Japanese Government), and The Order of the Sacred Treasure, Gold Rays with Neck Ribbon (2015, Japanese Government). He is a Foreign Member of German Academy of Sciences since 1999, and an American Chemical Society PMSE Fellow (2015). He was a member of Scientific Advisory Board for Max Planck Institute for Polymer Research, Mainz (2001-09). So far, he has been served as editor, regional editor or honorary editor, and as a member of (executive) advisory board or editorial (advisory) board, for twenty four international journals, and currently he is serving for four journals. He has edited 16 books including “Catalysis in Precision Polymerization” (WILEY, 1997) and “Encyclopedia of Polymeric Nanomaterials” (Springer, S. Kobayashi & K. Muellen co-editors, 2015). He has published approximately 470 original research papers, and around 240 review papers, book chapters, etc.

Hiroshi Uyama obtained his Master Degree of Engineering from Kyoto University in 1987 and subsequently Doctor Degree of Engineering from Tohoku University in 1991 under the direction of Professor Shiro Kobayashi. In 1987 he joined as an Assistant Professor in Tohoku University, thereafter moved to Kyoto University in 1997 and is presently a Professor in the Department of Applied Chemistry, Osaka University. He is the recipient of several awards and recognitions, including the Young Scientist Award (Chemical Society of Japan) and the Highest Award of Japan Bio-technology Business Competition. His research interests include biomass plastics and nano-processing of polymers.

Jun-ichi Kadokawa studied applied chemistry and materials chemistry at Tohoku University, where he received his M.S. degree in 1989 and his Ph. D. in 1992 under the supervision of Prof. Shiro Kobayashi. He then joined Yamagata University as a Research Associate. From 1996 to 1997, he worked as a visiting scientist in the research group of Prof. Klaus Müllen at the Max-Planck-Institute for Polymer Research in Germany. In 1999, he became an Associate Professor at Yamagata University and moved to Tohoku University in 2002. He was appointed as a Professor of Kagoshima University in 2004. His research interests focus on enzymatic synthesis of non-natural polysaccharides, new polysaccharide-based materials, and control of the higher-ordered structures of polysaccharides. He received the Award for Encouragement of Research in Polymer Science (1998) and the Cellulose Society of Japan Award (2010).