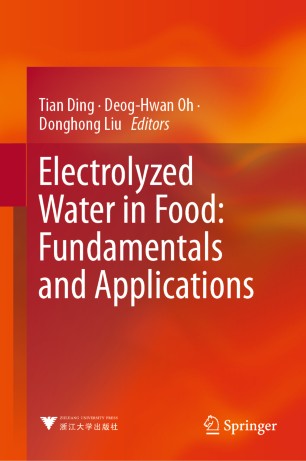 This book provides fundamentals, highlights recent developments and offers new perspectives relating to the use of electrolyzed water (EW) as an emerging user- and environmental-friendly broad-spectrum sanitizer, with particular focus on the food industry. It addresses the generation, inactivation, pesticide degradation and safety of food by EW, illustrates the mechanism of the germicidal action of EW and its antimicrobial efficacy against a variety of microorganisms in suspensions. In addition, the sanitizing effects of combining EW with various chemical and physical sanitizing technologies have been evaluated, and recent developments and applications of EW in various areas including fruits and vegetables, meat, aquatic products, environment sterilization, livestock and agriculture has been described.
The book can be a go-to reference book of EW for: (1) Researchers who need to understand the role of various parameters in its generation, the bactericidal mecha
nism of EW and its wide applications for further research and development; (2) Equipment producers who need comprehensive understanding of various factors (e.g. type of electrolyte, flow rates of water and electrolyte) which govern the efficacy of EW and developing its generators; (3) Food processors who need good understanding of EW in order to implement it in the operations and supervisors who need to balance the advantages and limitations of EW and ensuring its safe use.

Tian Ding is an associate professor at the College of Biosystems Engineering and Food Science of Zhejiang University, China. Dr Ding obtained his Ph.D degree from Kangwon National University, South Korea. His research interests focus on the food safety and quality control, nonthermal sterilization, predictive microbiology and risk assessment. Dr. Ding did a lot of research on the generation, disinfection and application of EW and developed novel circulating electrolyzed water with higher available chlorine concentration. He received financial supports from more than ten national or provincial levels of foundations. He published more than 70 research papers (36 of SCI), authorized 10 patents and received three provincial levels of academic awards.

Deog-Hwan Oh is a professor of Kangwon National University-Department of Food Science and Biotechnology, South Korea. He specializes in Food Microbiology and Safety with emphasis in nonthermal food sanitizers e.g. electrolyzed water alone and hurdle enhancement with other sanitizers. He has been published more than 200 papers and received continuous citations on his work.

Donghong Liu is a professor in College of Biosystems Engineering and Food Science of Zhejiang University, China. Her ongoing research interests focus on the food safety including simulation, optimization, quality safety monitor, postharvest of fruits and vegetables and research development and application of electrolyzed water in food. In the recent five years, she presides over 20 projects including National key research project, National 863 key project, National Science Foundation project and foreign aid project hosted by MOST. Thereinto, in the aspect of EW, she presides two provincial projects about food preservation by EW and guides two master students to research the postharvest of fruits and vegetables and prolong its shelf-life by using EW. To date, she has published more than 260 papers of which 101 were included in SCI, 50 were included in EI and obtained over 40 authorizations for patents. Beyond that, she has participated in composing five books and setting up a national standard. For her contribution to the scientific community, she has been honored with National advanced science and technology workers and Zhejiang outstanding contributions to young and middle-aged experts.