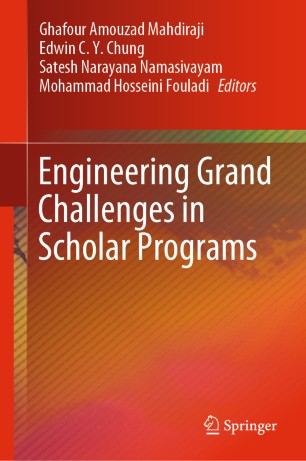 This book explains how Taylor’s University implemented a curriculum in their engineering program that prepares students to address challenges facing the world. Aim is to enable Engineers put their knowledge into application to meet the 14 challenges of the century as outlined by the National Academy of Engineering (NAE) of the United States.

The research groups are organized around the 14 grand challenges for engineering The structure of their syllabi is organized in a way that they address the 5 core competencies: Research Experience, Entrepreneurship, Service Learning, Interdisciplinary Curriculum, Global Dimension. It uses the CDIO educational framework, a project-based learning approach that provides students with the big picture of engineering. Through this method, students are able to:

As the only programe of its kind outside North America, it offers the brightest minds the opportunity to face real-world issues and places them on the cutting edge of the engineering world.

Ghafour Amouzad Mahdiraji received his B. Eng. degree in Electrical Power Engineering in 2002 and his M. Eng. degree in Communication and Computer Engineering from University Kebangsaan Malaysia in 2006. In 2009, he received his Ph.D. degree from the Universiti Putra Malaysia (UPM) in the field of Communications and Networks Engineering major in optical communication. From May 2009 to Aug. 2010 he was lecturer in the School of Engineering, UCSI University. Afterwards, he joined to the Centre of Excellence for Wireless and Photonics Networks in UPM for more than one year as Postdoc. From Nov. 2011 to May 2016 he worked as Researcher in Integrated Lightwave Research Group (ILRG) and as Senior Lecturer in Department of Electrical Engineering, University of Malaya. Since May 2016, he is working with the School of Engineering, Taylor’s University and awarded as Associate Professor in 2018. He was member of different projects with more than RM10M grants. Output of his research is more than 100 ISI journals and Conferences, supervision of more than 10 PhD and MSc students and filing 10 patents. Dr Ghafour’s research interest is microstructured optical fiber fabrications and optical fiber based radiation dosimeter sensors.

Edwin C.Y. Chung graduated from Monash University (Clayton) with a Bachelor of Science majoring in Computer Science, a Bachelor of Engineering with first class honours majoring in Electrical & Computer Systems Engineering and a PhD in the area of asynchronous circuit design. He started his career in the semiconductor industry and has experience in both the design and the manufacturing sector of the industry. He has worked as an individual contributor as well as project and team leader for various projects. He has also worked on various products design ranging from a 3G baseband processor while with NEC Australia, a 32 bit microRISC controller core while he was with Motorola in Adelaide to a firmware for a keyboard scanner for Atmel in San Jose. Prior to joining Taylor’s University, Edwin was an Innovation Consultant with Kwerkus Six – a startup he co-founded with five other ex-Intel staff from Intel’s IT Innovation Centre. During his time with Intel’s IT Innovation Centre & Kwerkus Six, he has introduced Design Thinking to a number of organisations. Since joining Taylor’s University, he has introduced an undergraduate engineering design module that introduces students to Design Thinking and TRIZ. Edwin like to consider himself as a computer scientist and an electrical & computer systems engineer by training, an ASIC (application specific integrated circuit) design engineer by planning, and now, an innovation catalyst and an educator by accident.  Edwin is the Director for Knowledge Transfer and Commercialisation at Taylor’s University and the General Manager for Taylor’s Consultancy Sdn Bhd.

Professor Dr. Satesh Namasivayam has over a decade’s worth of experience in higher education. He has held several academic leadership positions where, he has played an instrumental role in the execution of various strategies that have helped in positioning academic schools. As a third-generation mechanical engineer, he is a Fellow of the Institution of Mechanical Engineers and a Chartered Engineer, registered with the Engineering Council, United Kingdom. He is also a Professional Engineer with Practicing Certificate, registered with the Board of Engineers Malaysia. Dr. Satesh is an evaluator with the Engineering Accreditation Council, Malaysia and has been involved in evaluating engineering degrees for accreditation in the country. He possesses a first class honours degree in Mechanical Engineering and a PhD in Thermo-fluids Engineering, both degrees awarded to him by the University of London.

Dr. Mohammad Hosseini Fouladi started his career as an engineer in one of the subsidiary companies of the South Pars Gas Field, Iran. He was a postdoctoral researcher at the National University of Malaysia (Universiti Kebangsaan Malaysia) before joining the Taylor’s School of Engineering in January 2010. He bagged the prestigious Vice Chancellor’s Award as ‘Taylor’s Most Cited Academic 2014’. Dr. Hosseini is a Chartered Engineer and a member of MIMechE, UK. He was promoted to Associate Professor in January 2015. His areas of expertise are sound and vibration as well as machine condition monitoring.