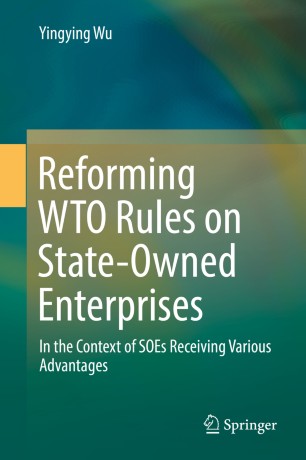 In the Context of SOEs Receiving Various Advantages

This book argues that the trade-distorting effects of advantages associated with SOEs are more severe from an economic perspective, and the behavior of SOEs after receiving advantages is of more concern, compared to private-owned enterprises (POEs). The premise is that the existence of SOEs per se is not the essential problem; rather, the underlying problems are (i) the disproportionate granting of advantages to SOEs (compared to POEs) and (ii) the behavior of SOEs once they receive advantages.
The book offers a systematic analysis focusing on the various advantages granted to SOEs and their subsequent behavior. Its detailed analysis reveals the inadequacy of current WTO rules and is complemented by a number of concrete proposals.

Yingying Wu is currently the lecturer at the School of International Law in China University of Political Science and Law. She received her J.S.D. and LL.M. from University of Illinois, and also received her LL.M. in International Business Regulation, Litigation and Arbitration from New York University. Her research interest is international law. She has published several articles at top journals. She was involved in the Duke-Geneva Institute in Transnational Law as an exchange student in 2013. She once served as a Student Scholar at U.S.-Asia Law Institute in New York University. She was also an Ph.D. intern at the World Trade Organization. She is the editor at Vindobona Journal of International Commercial Law and Arbitration. She once served as graduate editor at NYU Journal of Law & Business, as well as NYU Journal of International Law and Politics.