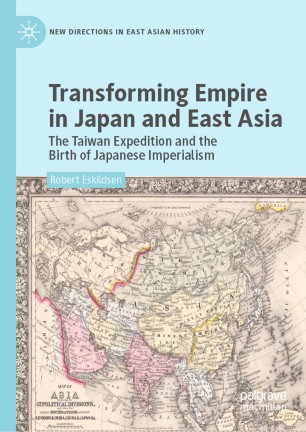 The Taiwan Expedition and the Birth of Japanese Imperialism

​This book examines the history of a military expedition the Japanese government sent to southern Taiwan in 1874, in the context of Japan’s subordination to Western powers in the unequal treaty system in East Asia. It argues that events on the ground in Taiwan show the Japanese government intended to establish colonies in southern and eastern Taiwan, and justified its colonial intent based on the argument that a state must spread civilization and political authority to territories where it claimed sovereignty, thereby challenging Chinese authority in East Asia and consolidating its power domestically. The book considers the history of the Taiwan Expedition in the light of how Japanese imperialism began: it emerged as part of the process of consolidating government power after the Meiji Restoration, it derived from Western imperialism, it developed in a dynamic relationship with Western imperialism and it increased Japan’s leverage in its competition for influence in East Asia.

Robert Eskildsen is Senior Associate Professor, Department of History, International Christian University, Japan. The author's academic training is in the field of modern Japanese history, notably in the sub-fields of premodern Japanese history and modern East Asian history. His publications on the topic include articles in leading journals of history and Asian Studies, such as the American Historical Review and The Journal of Asian Studies.

“Efforts to understand the peculiarities of Japanese imperialism remain important to scholars of Japan and comparative history alike, and Eskildsen makes a significant contribution in that respect … . His study opens a revealing window onto early Meiji political and cultural history in its regional environment as well as onto the multilayered workings of international relations in East Asia.” (Yoshihisa Tak Matsusaka, Monumenta Nipponica, Vol. 75 (1), 2020)

“Long in preparation, Transforming Empire was well worth the wait.  Painstakingly researched and powerfully argued, it is essential reading for anyone interested in the origins of the modern Japanese empire. Eskildsen’s notion of “recursive imperialism” and his bold re-interpretation of the relationship between the Meiji Restoration and the aggressive expansionism it gave rise to will have a profound impact on how we understand this critical turning point in the history of modern East Asia.” (Daniel V. Botsman, Professor of History, Yale University, USA)

“In this timely and well-researched book, Robert Eskildsen examines an important “trial run” by the Meiji Japanese state for its claim to be a modern empire, the 1874 Taiwan Expedition.  Going well beyond the standard view of the Expedition, Eskildsen expertly uncovers its many layers of meaning, not only as a diplomatic flexing of muscles for the newly established modern state, but also as an epicenter for generating civilizational and racial discourses that rationalized and guided Japan’s subsequent colonial empire. It addresses a critical gap in our understanding of the history of Japanese empire. Highly recommended to any student of modern Japanese history.” (Kyu Hyun Kim, Professor, University of California, Davis, USA)

“A fascinating study of Meiji Japan’s response to the 1871 murder of Ryūkyū mariners by indigenes in Taiwan and its subsequent military expedition to the island with objectives that included colonization. Meticulously researched and cogently argued, it pays close attention to domestic politics in Japan, international diplomacy in East Asia as well as local conditions in Taiwan. The book challenges conventional wisdom about the Taiwan Expedition and will likely become the standard work on the subject.”

“By situating Japanese imperialism in its dynamic and interactive relationship with Western imperialism, the author demonstrates that this ‘recursive imperialism,’ through a kind of feedback loop, also destabilized Chinese diplomatic practice and influenced Western imperialism. The book makes a major contribution to the study of modern Japan and sheds new light on the contested issues of colonialism, war, and territorial sovereignty in East Asia.” (Daqing Yang, Associate Professor of History and International Affairs, George Washington University, USA, and author of Technology of Empire: Telecommunications and Japan’s Expansion in Asia, 1883-1945)